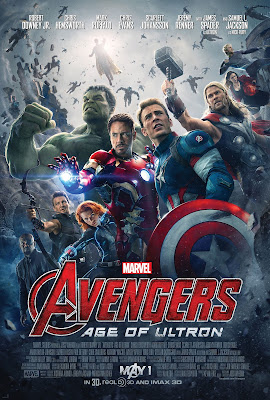 You know what? Avengers Age of Ultron gets a bit of an unfairly bad rep.
A lot of that comes from Joss Whedon's split from the Marvel Cinematic Universe following the release of the film where it was revealed that he had not enjoyed the process this time round, feeling that the wider needs of the Universe were getting in the way of telling the story. It also caused him to leave Twitter when fans started hating on him for certain character choices he made (*cough* Natasha and Bruce *cough*).
It is certainly not a perfect film. For one thing it is Avengers: Age of Product Placement with featured shots of Under Armour clothing, Beats headphones, Reebok trainers and, randomly, Gillette shaving cream!
What Ultron does do well is it captures the fun and excitement of having a group of superheroes working together and the wonderful chemistry established by the group of actors who have now been working together for a number of years.
It picks up where it left off, kickstarting the film with an action sequence that features Earth's mightiest heroes in a slow mo one shot again that says "we're hitting the ground running". It also contains the wonderful "language" moment.
There is the party scene where all the Avengers (except Black Widow) attempt to pick up Thor's hammer. The look on Hemsworth's face when Cap makes it wobble ever so slightly is priceless. It also has a wonderful pay off later in the film with Vision.
One of the major criticism's from fans was the middle section where they lay low at Hawkeye's family farm but it allows the movie a chance to breathe and it is a nice, welcome character development for Renner's Clint Barton who spent most of the first film under the mind control of Loki.
Given Whedon's history for killing off characters, it pulls the perfect bait-and-switch building up "one last job", "baby on the way" sacrifice for the hero that doesn't end the way you think.
It also gives him a wonderful moment with Elizabeth Olsen's Scarlet Witch where he delivers a pep talk about becoming an Avenger and how ridiculous it all is that he is just a guy with "a bow and arrow".
It is wonderful to finally see the MCU get another female superhero to add to the mix in the form of Wanda Maximoff aka Scarlet Witch (No, Maria Hill does not count!). Olsen is perfect in the role that will develop over the next phase as she struggles to deal with her enormous power and relationship to Vision, the child of Ultron.
Voiced perfectly by James Spader, Ultron is the dark mirror image of Tony Stark. Born out of a need to protect the Earth from attack but ultimately deciding the easiest way to do that is destroy humanity, he is the Monster to Stark's Doctor Frankenstein.
On reflection, now that Phase 3 is nearly complete, Age of Ultron actually fits in a lot better to the overall arching storyline. The final battle in Sokovia has huge repercussions for the group that leads into Civil War, Andy Serkis's delightfully wacky Ulysses Klaue as a plot device to introduce the notion of Wakanda (but worth it for his Cuttlefish speech) and Thor's subplot about going for a dream bath now makes a lot more sense given the events of Thor Ragnarok for example. Again it is about finding that balance between being a complete one shot film versus paving the road to Infinity War but if people were to talk a walk back down this path, they will find much more to enjoy second time around.