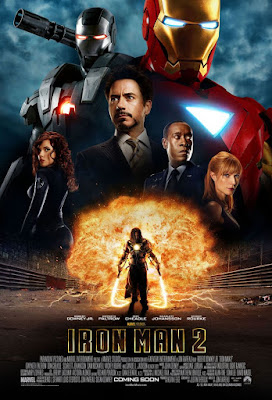 "I'm not saying that from the ashes of captivity, never has a phoenix metaphor been more personified"
It is difficult if this line was talking about Tony Stark, warmonger turned superhero, or Robert Downey Jr, troubled actor turned A-list superstar.
After the surprise success of Iron Man, the third film in the MCU was to continue the adventures of "Shellhead".
Looking back at it now, it is full of surprises such as the screenplay being written by Justin Theroux. The appearance of later Fox superheroes Kate Mara (Sue Storm) and Olivia Munn (Psylocke) in tiny roles. It is the film that brought together Hollywood couple Sam Rockwell and Leslie Bibb.
It also deals with the casting change of James Rhodes in a similar way to the introduction of George Lazenby as Bond with his "This never happened to the other guy". When Don Cheadle is introduced, there is the wonderful exchange between Stark and Rhodey:
"Didn't expect to see you here." "It's me. I'm here. Deal with it"
Heroes were present and correct. It's a shame that the villains didn't quite match them. Mickey Rourke's Whiplash is wasted after an entertaining action sequence in Monte Carlo. Although not a match for Iron Man physically, there is more fun to be had from Sam Rockwell's rival arms dealer Justin Hammer (love the way he refers to Stark as "Anthony") and Garry Shandling's Senator Stern.
Stern's committee hearing is one example of how Marvel is able to ground their films in reality, with a very real discussion of how Iron Man's actions on foreign soil would affect America and how he is not accountable to the government. This is something that will come round full circle in Age of Ultron and Civil War.
The issue with Iron Man 2 is not the CGI man in flying metal suit battles multiple other flying metal suits but that it was less concerned with being an Iron Man sequel as it needing to be an Avengers prequel.
Whereas the original Iron Man only had a couple of nods to the wider Marvel universe, this film burns through references faster than Tony Stark burns through palladium cores for his arc reactors.
There could have been a fantastic take on the Iron Man "Genie in a bottle" storyline from the comics where Tony descends into alcoholism to cope with the pain that his arc reactor is causing him.
Instead we get multiple references to SHIELD, Nick Fury, Captain America's shield and the introduction of Scarlett Johansson as Natasha Romanoff aka Black Widow.
Jon Favreau's direction keeps things moving at a good pace however and manages to showcase Stark's inventiveness and action credentials. He even manages to give himself a chance to use his UFC skills in a fight... even if he is upstaged by Black Widow!
Overall, it is the weakest of the Iron Man trilogy but does serve as an effective building block in the foundations of the MCU.