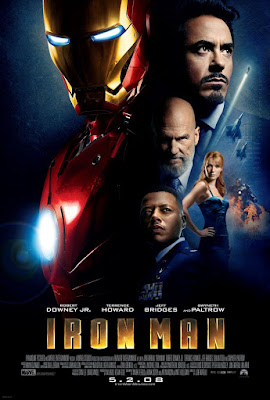 Has it really been ten years since it all began? It's hard to believe right Jeremy Piven?

Who would have believed that a movie directed by the guy who was Pete Becker on Friends, about a second tier Marvel hero played by a post-jail & troubles Robert Downey Jr would launch a billion dollar franchise that is still going from strength to strength 18 films down the line?
But the Marvel Cinematic Universe hit the ground running and they are forever indebted to RDJ because his performance as "genius, billionaire, playboy, philanthropist" Tony Stark is note perfect.
The film is fast, loose, full of colour, wit and boundless energy. A world away from DC and Nolan's (excellent) but "Why so serious?" Dark Knight trilogy.
The references to the comics are there for the fans (the original Mark I suit) but never at the expense of an audience entirely new to this world.
It also does a subtle job of universe building. There is Rhodey's look at the Mark II suit and quipping "Next time baby" (sadly not for Terrence Howard though!), and the introduction of SHIELD through Agent Coulson's character who would become pivotal to Phase I.
But it was the post-credit sting with Samuel L. Jackson's Nick Fury turning up at Stark mansion to talk about the Avengers initiative that sent fanboys into meltdown.
It isn't perfect. Jeff Bridges is very "un-Dude" but ultimately won't rank highly on the list of top Marvel villains (although I would dare you to come up with a Top 5 list of truly memorable MCU villains that doesn't have to include Wilson Fisk or Kilgrave and therefore not canon).
One can also see the beginnings of the MCU's biggest criticism. You know, the one where Act 3 descends into two (or twenty) CGI men in metal suits smashing into each other.
However Downey Jr is a charisma fuelled arc reactor that powers this entry to classic comic book movie status and arguably one of the finest and most complete superhero origin stories.