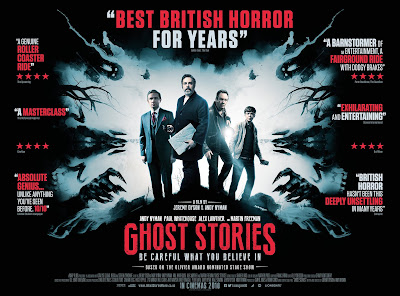 Ghost Stories is *not*, as some may wonder, a sequel to David Lowry's A Ghost Story from last year. It is an adaptation of the theatre play of the same name, written and directed by Jeremy Dyson (The League of Gentlemen) and Andy Nyman (Derren Brown), who also stars as Philip Goodman, a debunker of the supernatural and paranormal.
Goodman is contacted by a former paranormal investigator on his death bed who needs Goodman to tell him that three cases he struggled to explain are in fact not evidence of the paranormal.
Goodman proceeds to interview the three men who had these experiences; A nightwatchman (Paul Whitehouse), a student (Alex Lawther) and a smarmy businessman (Martin Freeman). While initially they seem like separate tales, certain details start to crop up that suggest something more sinister is at play here.
As mentioned earlier, this is based on a play (which this reviewer saw twice and was chilled to the bone both times) and the plot is very similar although the framing device is slightly different (In the play, Goodman was delivering a lecture to the audience).
Given the previous work of the writing and directing duo, one can expect a reverence for British horror, a macabre sense of humour and a film where everything is not what it seems... despite the existence of the lead character.
Shot in the style of Seventies British horror films; static cameras, long shots where your eyes move around the screen looking for something evil, 8mm sequences; the stories are put together deliberately to slowly crank up the dial of terror before releasing all that tension with a jump scare. And it is to their credit that the finished product has the desired effect.
A lot of this comes from the performances from the men reliving these terrifying encounters.
Paul Whitehouse is superb as the angry, bitter, broken Nightwatchman who is plagued by mysterious noises and visions during a late shift in the single most effective sequence. He is best known for his comedic roles but he is even better at the portraying the drama and horror he feels.
Alex Lawther is once again incredibly effective as a young man scared to the point of insanity by something he encountered in the woods but he is in danger of being typecast as the troubled youngster that he has previously played in Black Mirror and It's The End Of The F**King World.
The final tale introduces us to Martin Freeman's smarmy character who is able to get under Goodman's skin to the point that it makes him question his own experiences that leads to a final act that pulls the proverbial rug out from under the audience.
There might not be anything too original in any of the individual stories and the scares are signposted (along with hints and visual clues that will become clearer on second viewing) to anyone who knows their horror but the film plays with this knowledge and subverts these expectations.
Nyman & Dyson clearly know their horror and know exactly when to hold back and when to push the button and execute the scare, resulting in a wonderfully delivered ghost story that will chill you to the bone.