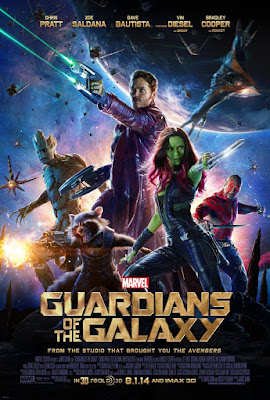 Let's admit it. This shouldn't have worked. A cosmic comedy adventure featuring D-list Marvel characters that included a talking raccoon and a walking tree that could only say three words?
And at a time when D.C. were struggling to put together a Batman vs Superman movie.
But Marvel Studios once again proved why they are the best in the business and knocked it out of the park with Guardians Of The Galaxy. Created a smash hit movie franchise. Turned Chris Pratt into a A-List superstar and got a compilation soundtrack to become one of the biggest selling albums of the year and nominated for a Grammy!
It might have seemed like a risk but GotG was actually an essential building block in the MCU as it was the first film to directly deal with the Infinity Stones which Thanos will ultimately look to finally add to his gauntlet after 6 years of sitting on his arse!
We get the Power Stone in the Orb as the "Ark of the Covenant, Maltese Falcon kinda vibe" MacGuffin for the movie and Benicio Del Toro's Collector to provide the back story to the gems.
The central plot is so-so, with the group moving from one planet to the next to retrieve the orb and stop the bland, generic bad guy's evil schemes which result in Phase 2's standard Act 3 of having very large things falling from the sky into over-populated urban areas (Helicarriers in Winter Soldier, Dark Elven ships in Thor The Dark World, Sokovia in Ultron).
What makes the film works in spite of any flaws is the casting, chemistry and "banter" of the Guardians.
Pratt *IS* Peter Quill from the moment he starts dancing around to Come And Get And Your Love in a giant space cave. It tells you everything you need to know about the character without him having to say a word but when he does he is hilarious. Confusing the likes of Gamora and Drax with his Eighties references to mighty heroes such as Kevin Bacon for example.
Despite initial misgivings over the casting of Bradley Cooper, he does an excellent job as Rocket Raccoon and Diesel (who has previous form as The Iron Giant) manages to do so much with just three words. Who knew there were so many different ways you could say "I am Groot"?
The biggest revelation here however was Dave Bautista as Drax the Destroyer. Best known for being from WWE, this was his first real film role and while there were the usual questions over whether he would be a Hulk Hogan or a Dwayne "The Rock" Johnson, he actually steals the entire film with his remarkable comic timing.
Overall, there is a looseness and sense of fun and wonder about the film that simultaneously expands the MCU into the wider cosmic universe but also keeps it grounded and real thanks to the soundtrack that features well known (and soon to be well known) songs from the Seventies and Eighties, all of which are perfectly used.
Finally, on this rewatch, despite pouring over every frame, sadly no closer to discovering James Gunn's final hidden Easter Egg. Next time A'Holes!