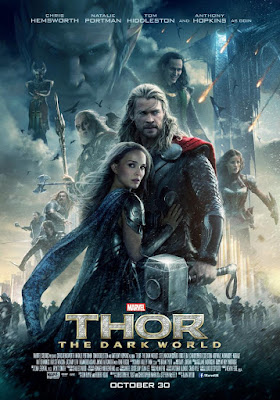 Thor The Dark World. The darkest moment in the Marvel Cinematic Universe. Not in terms of plot or backstage drama (that would come with Ant-Man) but in terms of colour palette and reviews.
The sequel to Thor is widely regarded as the least popular film in the MCU.
Following on from the excitement of Shane Black's Iron Man 3 straying from the convention and of Phase 1 Marvel movies, this feels disappointingly formulaic.
Following Patty Jenkins' departure (she would get her own back by directing Wonder Woman four years later), Alan Taylor was hired. Best known for Game Of Thrones, he brings a workman-like quality to the production but never threatens to bring the same level of wit or inventiveness to proceedings like Joss Whedon or Shane Black
The problem lies in the villain Malekith and the Dark Elves. Underneath the make up and auto tuned voice, you wouldn't be able to tell that Malekith is played by Christopher Eccleston (something he wants to forget as well).
There is a Macguffin about planetary convergences, eternal darkness and dark matter but really this is all there to introduce the third Infinity Stone... even if it is not currently in the form of a stone.
The real story is Thor's relationships. With Jane (who is moving on with a date with Chris O'Dowd), his father Odin and incarcerated brother (adopted) Loki.
There is double and triple crossing as the battle against the Elves and for the throne reaches its climax in... Greenwich, London of all places. I think this was during the two year period where every US blockbuster was contractually obligated to destroy Central London (G.I. Joe - Retaliation, Fast & Furious 6, London Has Fallen, Independence Day Resurgence, etc, etc).
Now there are continuity errors and goofs in every film. It's part and parcel of film making that things will go wrong.
This leads us to the single moment in the MCU that will wind up every Londoner or person from the UK who is familiar with the London Underground where Thor gets on a tube train at Charing Cross and asks how far to Greenwich and a woman tells him two stops. TWO STOPS! More like "two stops to Waterloo then change for the Jubilee line and then take it six stops to North Greenwich and walk to the Naval College mate"!
Still, it was nice to see Kat Dennings back as Darcy just for the moment she can shout "Meow Meow" at Mjolnir as the hammer goes flying by.