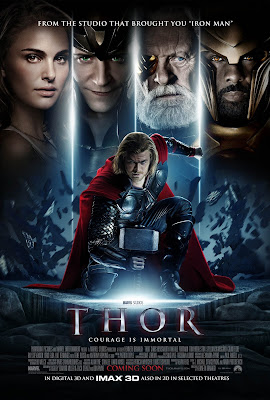 Again, it seems hard to believe but at the time, Thor presented a huge gamble for Marvel Studios. It introduced Asgard, Norse Gods, Space, Alien races and monsters. It could have gone so horribly wrong. Yet this was the studio that would go on to give us a film starring a talking raccoon and a tree monster!
Thankfully for Marvel, under the guidance of director Kenneth Branagh, Thor was the best movie since Iron Man.
It works because Branagh does not treat it as a Flash Gordon-esque adventure (that would have to wait till Ragnarok) but as a Shakespearean tragedy with the focus on a family feud between a King and two squabbling Princes both with an eye on the throne.
It succeeds thanks to having British heavyweights like Anthony Hopkins spitting out lines like "You are a vain, greedy, cruel boy" and "But you're NOT King. Not yet". Plus it introduced the majority of the world to Tom Hiddleston as Marvel's number one villain you love to hate, Loki.
Chris Hemsworth was also a relative unknown at this point. Really only appearing in the first ten minutes of the Star Trek reboot. But he perfectly captures the fish out of water element of his character as the selfish, boorish warrior who is stripped of his power and forced to learn a lesson on earth... and find love along the way.
Thor continues the development of S.H.I.E.L.D. and Agent Coulson is firmly established as Fury's number two, running the whole show in New Mexico and even ordering around Clint Barton aka Hawkeye (Jeremy Renner).
It remains one of the strongest entries in Phase 1 but contains the single biggest mistake in the history of the MCU. One that was thankfully rectified come The Avengers and that was the decision to dye Hemsworth's eyebrows blonde!

Infinity Stone Counter = 1 (Brief glimpse of the Tesseract aka the Space Stone in the post credit sting)
Posted by Dallas King at 01:00