At Movie-Con we got full screenings of the following films;

DISTRICT 9 - Good idea here but didn't quite work for me. Starts off with documentary-style footage of a government agency in control of a refugee camp for aliens that have crash landed in South Africa but abandons this halfway through for your standard sci-fi action movie. Will have people talking about 'Prawns' in South African accents for ages though.

INGLOURIOUS BASTERDS - Tarantino returns to form with his own unique take on WWII. His trademark dialogue is beautifully handled with star-making performances for Christoph Waltz as Col Hans Landa and Michael Fassbender as Archie Hicox. At times brutally violent, tense and hilarious, it's everything a Saturday night at the movies should be. Might even get people watching subtitled movies in the future!

ADVENTURELAND - Wonderful semi-autobiographical coming-of-age tale by Greg Mottola, telling the story of a young man forced to work in an amusement park over the summer to pay for college. All the cliches are there: girl to fall in love with, geeky friends, getting high, talking about sex, etc. but he manages to create a truly heart warming film. Do not go expecting another Superbad however. The trailers will undoubtably try and market it as this but it has more in common with Garden State or Squid And The Whale.

FUNNY PEOPLE - A huge misfire from Judd Apatow. Torn between wanting to be a full on R-rated comedy and tender story about redemption, it fails on both counts. Some great jokes but 100 dick jokes don't make a great movie... they make a Kevin Smith movie.

HURT LOCKER - Incredibly tense movie about a bomb disposal squad in the Iraq war. A blistering series of set pieces that analyses the state of mind of soldiers, for whom war is way of fulfilling a thrill seeking addiction.
Posted by Dallas King at 11:38 No comments:

Wow, what a weekend, with more previews, movies and Robert Downey Jr appearances you could shake a stick at!

For brevity's sake, I'll talk about the highlights of each day. For a full breakdown of what was shown go to http://www.empireonline.com/movie-con

Best clip - KICK ASS
The audience went mental for the footage which literally kicked ass. Set to be the superhero film of 2010 (and Nicolas Cage's best performance since... a long time ago).

Worst clip - NINJA ASSASSIN
Clip was good, lots of action but looked like it was from the climax of the film.

Most ridiculous clip - TWILIGHT SAGA: NEW MOON.
First Taylor Lautner (aka Jac-Abs) took his shirt off to wipe blood off Kristen Stewart's face, then R-Patz slowly took his shirt off while looking moody. Girls swooned, blokes laughed their asses off.

Top 5 trailers - Kick Ass, The Lovely Bones, Dorian Gray, Where The Wild Things Are, A Nightmare On Elm Street

Best clip - IRON MAN 2
Looks like being even better than the original. More Nick Fury, more War Machine, more Sam Rockwell. Not too sure about Whiplash though. Oh, and RDJ was there again (man-crush is in full effect now).

Worst clip - PANDORUM
Run of the mill Sci-Fi horror. Never begin your trailer with the words "from the producers of the Resident Evil movies"!

Most ridiculous clip - PONYO ON THE CLIFF
Bonkers!

Biggest surprise (joint) - Winning the Kim Newman 'Basterd Hard' movie quiz. How hot Kathryn Bigelow looks for 57. How underwhelmed I was with the Avatar footage. 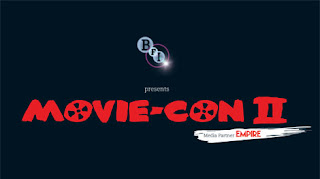 Will have a full review of the weekend on Tuesday when I'm back from holiday, but keep an eye on http://twitter.com/dallas_belmont over the weekend for the latest updates from Movie-Con.
Posted by Dallas King at 11:53 No comments:

You Know What Really Grinds My Gears?

People who refuse to watch a film just because it has subtitles!!!

This weekend we started screening COCO BEFORE CHANEL to big audiences (thanks to the fact that nowhere else in Aberdeen is showing it... cheers Vue & Cineworld!), but there was a small percentage of customers who decided against seeing it when they discovered it was in French with English subtitles. "I came in to watch a movie, nae read one" - sample customer.

Now to be fair to them, the advertising campaigns on the TV seem to have glossed over the fact it is subtitled, but I am urging these people not to be put off by having to make that little bit of extra effort while at the cinema. Why? Because they are missing out on a whole world of fantastic films by limiting themselves to the movies that come out of the UK and USA. The quality of films from France, Asia and Mexico in the last few years is worth a thousand TRANSFORMERS 2 or SCARY MOVIES.

Since CROUCHING TIGER, HIDDEN DRAGON made a breakthrough in how UK audiences saw foreign language films in 2000, these are some of the excellent films that people have missed out on because they are subtitled:

BATTLE ROYALE, PAN'S LABYRINTH, DOWNFALL, TELL NO ONE, THE LIVES OF OTHERS, LET THE RIGHT ONE IN, RINGU, INFERNAL AFFAIRS, etc, etc.

So please, check out these films in your local independent cinema when they are released (it's why we are here after all) before they are remade by Hollywood (like any Asian horror film or Let The Right One In). After all, they won't all turn out like the Oscar-winning THE DEPARTED!!!
Posted by Dallas King at 06:49 1 comment: