One Day review - One day that certainly hasn't been seized! 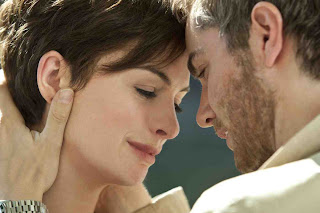 Working in Waterstone's at the moment, I know just how popular this book is. We actually sold out of copies yesterday. You can't go anywhere without seeing someone reading "the book with the bright orange cover". And with that sentence, I join every other film critic in the country who has used that observation in their review... but I know first hand having sold dozens of copies!
I gave into the hype and decided to read it, like I did with Twilight, just to see what all the fuss was about. Unlike Twilight, I was actually quite taken with One Day, which ironically I read in just one day. I liked the hook of seeing the yearly snapshot of their relationship as we revisit Em and Dex on St Swithins Day over the course of 20 years, leaving the reader to fill in the blanks, and they could due to the fact that writer David Nicholls developed fully realised characters on the page, with a relationship you can invest and believe in.
The same can not be said for the big screen adaptation unfortunately.
In Raiders Of The Lost Ark, Indiana Jones remarks "It ain't the years honey, it's the mileage", and that is exactly what the film is missing. The film skims over 23 years in 107 minutes (some years get 10 minutes, some are inexplicably just 30 seconds of Anne Hathaway swimming) and it never allows the audience enough time to connect with the characters and deliver that emotional punch that we require to have us crossing our fingers that Emma and Dexter finally get together by the end credits. What works in the novel fails to transfer to the screen in a way that romantic films with a similar fractured narrative like When Harry Met Sally and (500) Days of Summer did. I'm not just saying that as someone who has read the book, newcomers are likely to find the whole affair too rushed to care enough.
Another barrier to my inability to buy into the central relationship lay in the casting of the two leads. Jim Sturgess overplays the prickish nature of Dexter which makes it difficult to see what Emma actually finds likeable about him. And then there is Anne Hathaway.
In the book, Emma is meant to be a bit frumpy and bookish, and I'm sorry but putting a pair of Harry Potter glasses on Anne Hathaway does not stop her looking like Anne Hathaway! Plus her "Leeds" accent at times goes for a longer wander than a student taking a gap year.
The film does have one saving grace in the form of Rafe Spall, two if you count an all too brief appearance by the lovely Romola Garai. Spall lights up the screen and steals the whole film as the lovelorn Ian, one of Emma's early romances, and I'm not just saying that because his character is a fan of both Evil Dead and Wrath Of Khan!