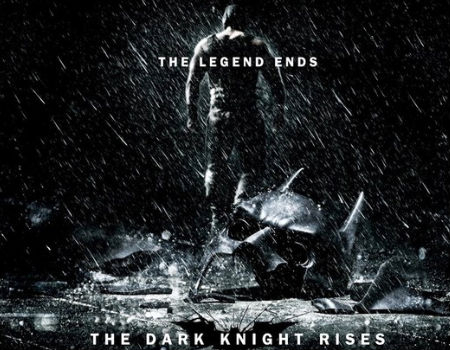 "Every great magic trick consists of three parts or acts. The first part is called "The Pledge". The magician shows you something ordinary: a deck of cards, a bird or a man. He shows you this object. Perhaps he asks you to inspect it to see if it is indeed real, unaltered, normal. But of course... it probably isn't."

Forget the threat of Bane breaking the Bat, the real damage to the Caped Crusader was done in 1997 when Joel Schumacher's critical and commercial flop Batman & Robin crippled the franchise and the superhero genre.
When your friendly neighbourhood Spider-Man gave the comic book movie a radioactive bite to the arm, Warner Brothers gave the preverbial keys to the batmobile to Christopher Nolan, a director of critical hits Memento and Insomnia but unproven on a big studio blockbuster.
Nolan set out to prove that Batman could exist in the real world and for the first time with the character, explore exactly how an ordinary man, albeit a billionaire playboy, goes about dressing up as a bat to fight crime.
Batman Begins was intelligent filmmaking on a blockbuster scale and it would be fair to say that the end result was akin to Nolan pulling a bat-shaped rabbit out of his hat.

"The second act is called "The Turn". The magician takes the ordinary something and makes it do something extraordinary. Now you're looking for the secret... but you won't find it, because of course you're not really looking. You don't really want to know. You want to be fooled."

Ironically for a film called The Dark Knight, the sequel kicked off with a scene set during the harsh light of day. Nolan was giving us a Gotham we had never really seen before and the thrilling bank heist proved to be worthy of comparisons to Michael Mann's Heat and as a terrific introduction to a new take on one of Batman's most iconic characters, the clown prince of crime in Gotham, The Joker. Nolan had received a lot of criticism prior to the film's release for casting Heath Ledger in the role but his faith was rewarded in what turned out to be one of the all-time great screen performances, which won Ledger a posthumous Oscar.
Nolan truly achieved something extraordinary with TDK by not only creating a sequel that was superior to the original (a case that can be argued for most superhero sequels) but he had crafted something that transcended its comic origins to simply become a fantastic film.

"But you wouldn't clap yet. Because making something disappear isn't enough; you have to bring it back. That's why every magic trick has a third act, the hardest part, the part we call "The Prestige"."

Email ThisBlogThis!Share to TwitterShare to FacebookShare to Pinterest
Labels: The Dark Knight Rises