It is Oscar night and while I am up watching the tedium that is Ryan Seacrest insipid interviews on the red carpet I have decided on my own personal winners for the best film, actors, etc from the past year.

Best Visual Effects
Rise Of The Planet Of The Apes

Winner: Rise Of The Planet Of The Apes

Winner: The Skin I Live In

Winner: Tom Hiddleston
Posted by Dallas King at 14:59 No comments:

Brandon is a handsome thirtysomething working in New York in an unspecified job with a fancy apartment.  On the outside it seems he has everything, but in fact it is all a mask that he projects to cover up some deep seeded issues. 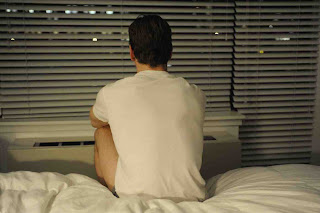 From that brief description you could say that Brandon has a lot in common with another cinematic/literary character... Patrick Bateman.
In American Psycho, Bateman mask of sanity covered up psychotic tendencies and the film/book was a vicious attack on the materialism of the Eighties.
Shame's protaganist Brandon's obsession though isn't murder but sex.  Which if recent reports and television shows are to be believed is becoming an increasingly common, serious and relevant addiction.
Whether it is hiring escorts, a one night stand, online sex forums, magazines, dvds or downloading gigabytes of pornography onto his office computer or masturbating in the shower, Brandon does everything to keep his sexual urges at bay.
However the carefully constructed wall he has built up to shield himself from any form of outside connection comes tumbling down with the unexpected arrival of his sister Sissy, who has her own set of problems.
Steve McQueen (not that one) has crafted a truly haunting piece of cinema that holds a mirror up to Brandon (and in some respects the audience).  It is an incredibly beautiful film to look at, (his shot construction and framing is impeccable, whether it is a tracking shot following Brandon jogging along 31st Street or an unmoving camera capturing an argument that suddenly exposes a tear on Sissy's face), but there is also a coldness and detachment to it that never allows the sexual imagery to become erotic or titillating.  It provides us with no feeling of joy in the same way that Brandon can never achieve, no matter how hard and consistently he tries.

Fassbender bares all as Brandon (both metaphorically and literally) and it would be fair to say that from the evidence of the opening scene, Michael certainly has nothing to be, ahem, ashamed of.  He plays it very internalised to begin with, as Christopher Walken says in True Romance "a game of show and tell.  You don't want to show me nothing but you're telling me everything", but as cracks appear in his mask we get a tear here, a violent outburst there, until his whole world unravels during a flashback sequence over the night's events.
Sure it might not have those grand-standing, scenery chewing moments that Oscar loves so much but it is certainly the most compelling, bravest performance of the year. 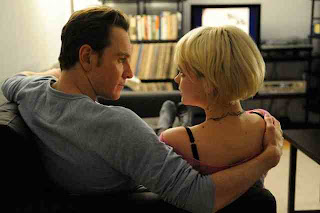 Fassbender's acting is elevated by having the sublime Carey Mulligan to bounce off.  I think it is fair to say that when we are first introduced to Sissy, Carey has come a long way from Sally Sparrow in Blink (still my all time favourite Doctor Who episode).  From their initial encounter when Brandon finds Sissy in his apartment, it is clear this is not your normal brother/sister relationship.  There is a troubled history between them but McQueen and screenwriter Abi Morgan wisely leave the details up to the audience's imagination.
Like recent sports dramas The Fighter and Warrior, Shame manages to transcend its genre origins to become more than just "the sex addiction movie" by having a gripping family drama at its core.
Sissy is the yin to Brandon's yang (and the win to his wang).  Where Brandon is a very internal person, Sissy wears her emotions on her sleeve.  She is a poster girl for the neurotic, needy and vunerable, perfectly illustrated by her long haunting rendition of New York, New York in a trendy bar.
At one point Brandon attempts to have a normal relationship with a woman at his work but via an uncomfortable dinner date and hotel tryst, it is doomed to fail.  Brandon's redemption however may in fact lie in repairing his relationship with Sissy, but is he too far down the path to self destruction?
Shame is not a film that seeks to provide the audience with any easy answers.  It is a challenging, thought provoking and stunning piece of cinema that will haunt you for days and will require multiple orgasms viewings, and there is certainly no shame in that!
5 stars
Posted by Dallas King at 12:27 No comments: