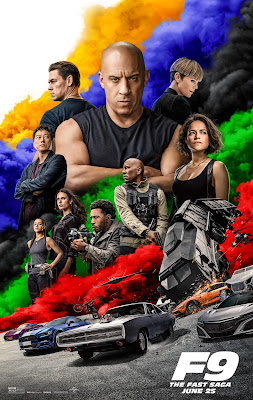 At the start of Fast & Furous 9, Dom and Letty are living the quiet life off the grid with Dom’s son Brian. You know, “family”. Their peaceful existence is interrupted when a skeleton from his closet comes back to haunt him. For a man who has preached the importance of “family”, the team and audiences alike are shocked to discover that the man plotting the end of the world is Dom’s previously unmentioned brother Jakob.

After chipping off The Rock (branching off to Hobbs & Shaw outings), they get a chip off the old block and fellow WWE superstar John Cena plays Dom’s estranged brother Jakob Torreto. I guess if you are casting a brother he doesn’t see, it makes sense to pick John Cena!

If the idea of Vin and Cena as brothers has you like “really?”, it would not be the first time the Saga has stretched the limits of believability. After all, this is a franchise that has evolved over twenty years from a Point Break remake that swapped surfboards for subarus to the world’s longest runway chase to The Rock casually changing the trajectory of a torpedo with his bare hands.

There have been moments where Dom’s Dodge Charger has threatened to jump the shark but F9 sees the car become a cow that jumped over the moon.

Yes, the trailer have hinted at it. At this point it was a space race as to who would get there first. Fast & Furious or Mission Impossible but Tom Cruise’s running was ultimately pipped at the post by the franchise running on Diesel. This is a man who no longer lives his life by a quarter mile at a time but light years at a time. Having graduated from street racers to self-proclaimed spies and secret agents, it makes sense that they have reached their own Moonraker.

The film has a bloated runtime of 143 minutes. If the film had stuck to a fast and furious pace, it could have probably clocked in at about 90-100 minutes. The problem is that everytime the movie gains momentum with a thrilling set piece, it stalls to retcon its increasingly convoluted continuity. We must learn about Dom & Jakob’s backstory, the #JusticeForHan explanation, etc.

It is a shame because when it gets going, it is admittedly a lot of stupid fun. The action sequences, of which there are many, are slick, entertaining and as ridiculous as ever (this reviewer must have rolled his eyes at least six times in the opening 20 minutes). As long switch your brain’s gear into neutral. Particularly if you are from Edinburgh as the geography of the car chase in that is completely non-sensical.

The most intense struggle is not between Dom & Jakob but between the movie’s internal logic and your brain. Ludacris’s Tej keeps banging on about science and math to explain how they get away with some of the crazy stuff they do but other times, they rip up the rulebook and say “what the hell, it’s a movie isn’t it?”. One example of this is the use of electromagnets within the story. They are strong enough to pull a car a street away through a building but somehow do not cause the car that they are held within to collapse in on itself. If it rips a fork out of someone’s hand while they are eating, why do they not rip out metal fillings from their teeth?!

The film, and the franchise’s biggest problem is the lack of tension or threat to the characters. There is a moment following the first mission where Tyrese Gibson’s Roman questions his immortality after unbelievable survival against the odds. The rest of the team laugh it off, saying they are not superheroes. As it happens, the FF movies are close to becoming the automotive equivalent of the MCU. Not in a good way however. One of the main issues fans have with superheroes movies is a lack of consequence to the actions. The stakes are not high enough. How can one truly believe in the danger of the missions when the threat of anyone dying is inconceivable? Especially when, just like superheroes, no one ever stays dead for long. To paraphrase The Dark Knight, “You either die a hero or live long enough to become the villain who lives long enough to join the team and welcome the return of the hero miraculously back from the dead”.

Fast & Furious 9 is the cinematic equivalent of a go on the dodgems. You have a great time but there is no risk of anyone being hurt and ultimately you leave the ride slightly underwhelmed.

Fast & Furious 9 is in cinemas from Thursday 24th June