This week I wrote a little piece on how the success of the Avengers has boosted Shawarma sales since its release. Also provided a few other examples of products that have received a boost on the back of movie product placement.
I am very proud to say that the blog is online at the Empire magazine website, and you can read it here.
Hopefully it will be the first of many items that I'm able to do for my favourite movie magazine.
Thanks to Helen O'Hara and Phil De Semelyn for their help and advice. 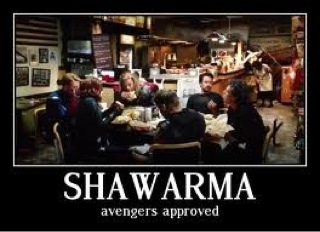 Last night I simultaneously discovered the highs and lows of being a film geek.
Being such a massive nerd/geek, it might not surprise you to learn that I am currently single and live on my own.
This proved to be a terrible inconvenience yesterday when I nearly choked to death after getting part of a peanut butter sandwich stuck in my throat, and there was nobody around to give me the Heimlich manoeuvre.
After ten seconds of feeling sad that I had no one to help, my mood quickly shifted to panic as remained unable to either swallow or cough up the sandwich. I had made it to the bathroom where I was confronted in the mirror by a sight very similar to the photo below.

It was at that point that I remembered the film Choke. It is based on the novel by Chuck Palahniuk and is about a sex addict con-man played by Sam Rockwell who plays on the sympathies of those who rescue him from choking to death in restaurants.
There is one particular scene in the film where Rockwell forces a choking incident in a quiet restaurant only to discover that the sole customer is blind and doesn't notice him. He is then forced to perform a solo Heimlich manoeuvre by forcing the back of a chair into his midsection.
Grabbing the chair from the study, I did the same thing and after a couple of attempts, a piece of bread coated in peanut butter and spit went flying across the room.
So being such a film geek, I guess that in some strange way, because I saw the film, I owe a life debt to Sam Rockwell and director Clark Gregg aka Agent Coulson himself.
Just like by watching Die Hard I would know what to do if I was in a skyscraper that had been taken over by terrorists/thieves. Or the girl who diagnosed herself with cancer after watching My Sister's Keeper.
So my question to you is, has watching a movie ever saved your life or come in handy in a real-life situation?
Posted by Dallas King at 15:24 No comments: