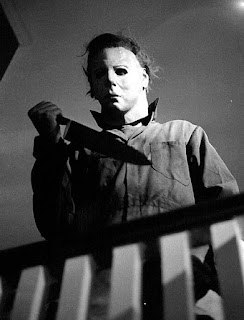 With All Hallow’s Eve approaching, the Belmont could not let the opportunity to screen a scary movie pass us by and that is why this Halloween we are screening… Halloween.
John Carpenter’s original 1978 classic that introduced the world to one of cinema’s greatest boogeymen and one of the most influential horror films of all-time.
Horror films used to be about Gothic threats like ghosts, vampires and werewolves but Alfred Hitchcock’s Psycho in 1960 gave evil a human face and brought the horror into suburbia when Janet Leigh met her fate in a shower in the Bates Motel.
18 years later Janet Leigh’s daughter Jamie Lee Curtis would become the new Scream Queen.
She plays a babysitter who is stalked and terrorised by the phantom-like figure of Michael Myers.  A monster who killed his sister when he was a child and returns to his home town to kill again on the anniversary of her death.
Halloween was the film that set “the rules” of the genre. Don’t drink. Don’t do drugs. Don’t have sex. Don’t ask “Who’s there?” and so on and so on.
It may have popularised the Slasher movie and prompted a host of remakes, reboots and rip-offs but Halloween remains the original and best... and most importantly, the scariest.


Dallas King
Posted by Dallas King at 03:38 No comments: