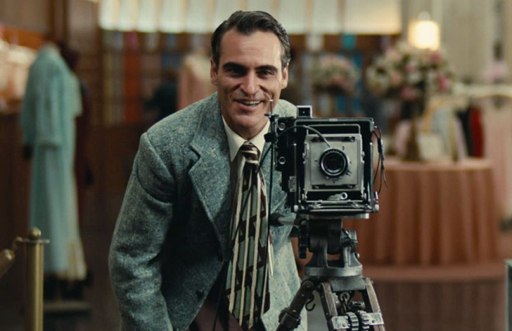 As I emerged from a 70mm screening of The Master on Tuesday, the United States of America was in the midst of going to the polls to elect their President.
During the Presidential election, several topics become focal points of the campaign including the economy, religion, etc.
Back in 2008 (another election year), Paul Thomas Anderson produced a magnificent study of one man's obsession with "the American dream" with There Will Be Blood.
With The Master Anderson turns his attention to another important issue for many Americans, the issue of faith. And in doing so, may well have created a "master-piece" (sorry, had to get that cheap pun out of the way).
Following a tour of duty overseas in World War II, Freddie Quell (Joaquin Phoenix) is a loner, a drifter and a drunk. Freddie is a lost soul. A soul in need of saving in the eyes of Lancaster Dodd (Philip Seymour Hoffman) who himself is a "writer, a doctor, a nuclear physicist and a theoretical philosopher. But above all, is a man, a hopelessly inquisitive man, just like you". If Freddie has questions, Dodd believes that The Cause has the answers.
In one of the films most powerful moments, Freddie undergoes "informal processing" with Dodd. He is forced to keep his eyes open and not blink during questioning for failure will result in the process being repeated. What follows is an intense examination of Freddie's troubled psyche. It is such an exhilarating, cathartic, intimate experience, it is no surprise to see the two share an almost post-coital cigarette upon completion.
One can draw a parallel between Freddie's relationship with The Cause and the experience that audiences may have with the film.
Upon first viewing of The Master it is easy to see why it is so appealing and seductive. Amid a cinematic landscape of never-ending sequels and remakes, this an original film of genuine vision and power. It appears to say and do all the right things and you can be quick to buy into the praise it has received so far from the critics.
The cinematography is breathtaking, creating a hypnotic, poetic beauty that is amplified by Jonny Greenwood's score.
Joaquin Phoenix is mesmerising as Freddie Quell. His hunched body portrays a man uneasy in his own skin, at odds with himself, always tiptoeing the line between rage and serenity.
It is easy to see why Freddie would be drawn to a man like Lancaster, especially when played by Philip Seymour Hoffman. He commands the audience's attention with charm, eloquence, humour and just a hint of BS.
But is it all too good to be true? After all blind faith can be dangerous. Naysayers may claim that the pacing moves at a glacial pace or that like The Cause, there is no real validity to the rhetoric and it's simply a case of style over substance.
It is important to ask questions yet the film does not set out to provide easy answers. Sure the Scientology comparisons are there to see but it is much more than that. The notions of faith, religion and their role in society melt away to reveal the heart of the story which is simply about the relationship between two people. They say that opposites attract but when the two people are as strong-minded as these two, something's gotta give.
At one point Dodd tells Freddie "If you figure out a way to live without a master, any master, be sure to let the rest of us know, for you will be the first in the history of the world".
After much consideration, and a few glasses of the kool-aid, I've decided that The Master is one film that I certainly do not want to live without.
I awoke on Wednesday morning to hear Obama's supporters cheering for "four more years". As a Paul Thomas Anderson supporter, I hope that we won't have to wait that long for another film as fabulous as this one.