Oh God, oh Jesus Christ! You had better keep your Appointment With The Wicker Man 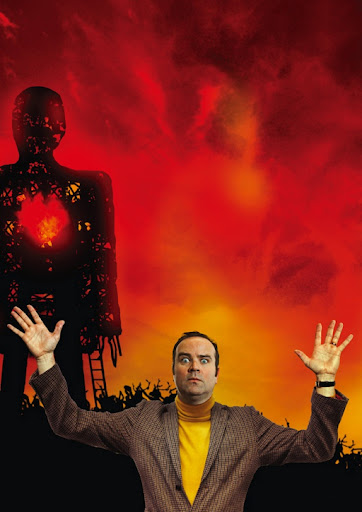 The Wicker Man is a true 'cult' classic, one of the most influential horror films of all time and arguably the best Scottish film ever made.
It is fair to say that the Loch Parry Players production of 'The Whicker Man' takes a fair amount of dramatic licence when it comes to their adaptation of this famous film, yet it is certainly no way near as horrific as the recent Nicolas Cage remake and not a single bee in sight.
An Appointment With The Wicker Man is a play within a play and concerns Rory Mulligan, a TV star from a successful Glaswegian detective series, who steps in at the last minute to play the role of Sgt Howie in a local amateur dramatic company's staging of The Wicker Man.
Rory starts to get frustrated with the lack of professionalism of the cast, the changes to the script (including the addition of a few Broadway style musical numbers), and also the lack of information regarding the mysterious absence of Roger Morgan.
As the opening night grows ever closer, Rory begins to suspect that the Loch Parry Players, led by Finlay Fothergill, have an altogether more sinister use for him as The Whicker Man reaches it's shocking climax.
The style of the amateur production conjures up images of the Sandford Dramatic Society's production of Romeo & Juliet that featured in Hot Fuzz, and it draws favourable comparisons to the Edgar Wright/Simon Pegg film.
Both used the central plot device of The Wicker Man of having an outsider coming into a rural community where everything may not be as it seems, and both successfully managed to balance the humour created by the differences between the parties and creating a growing feeling of unease and suspense as the true nature of the mystery is revealed.
Greg Hemphill (Chewing The Fat, Still Game) and co-writer Donald McCleary have written a script that pays an affectionate tribute to the horror film yet never alienates members of the audience that have never seen it.
Die hard fans will geek out on visual gags and attention to detail in the sets and costumes or in-jokes and references like Lord Summerisle improvising "snails, blah blah, some Walt Whitman pish" which refers to a scene only available on the Director's Cut DVD.
The plot of the play and the order in which the company rehearse their scenes mirrors that of the original, even down to dialogue being appropriated by these new characters, which allows newcomers to follow the story without ever feeling like they are missing out on anything.
This is helped by a very witty script that keeps the gags coming thick and fast with many of them familiar to anyone who has dabbled in the world of amateur dramatics.
All of them are delivered by a cast that is on fire (sometimes literally). Sean Biggerstaff (Harry Potter) is terrific as the big star in a small pond, co-writer Hemphill naturally gives himself the majority of the cracking one liners, "I knew I should never have put on Joseph Fritzel Superstar" and Sally Reid nearly steals the show with a unique reenactment of Willow's seduction dance.
This show is one appointment that you must keep at all costs as the result is a hilarious evening's entertainment for film fans, am-drams and Wicker Men alike.

An Appointment With The Wicker Man plays at His Majesty's Theatre from 21st -25th February before touring to Glasgow, Inverness and Dunfermline. It may also appear at The Edinburgh Film Festival later this year.

Email ThisBlogThis!Share to TwitterShare to FacebookShare to Pinterest
Labels: An Appointment With The Wicker Man, Greg Hemphill, National Theatre Of Scotland, Sean Biggerstaff, The Wicker Man