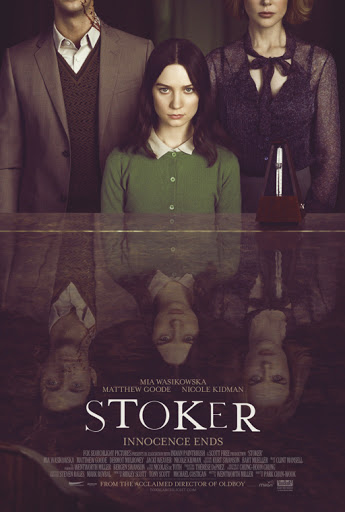 Stoker is adapted from a script written by Prison Break's Wentworth Miller (the fact he had it tattooed to his body must have made for an interesting cast readthrough) and is the first English language film from director Park Chan-Wook.
The fact that Park directed Oldboy means that he knows a thing or two about, how would one put it, the "unique family dynamics" at the heart of Stoker.
India Stoker (Mia Wasikowska) is a rather odd, lonely girl dealing with the death of her father on her 18th birthday. While her mother (Nicole Kidman) is cold and distant, India finds herself developing a curious interest in her mysterious Uncle Charlie (Matthew Goode) who turns up at the funeral out of the blue.
With a title like Stoker, one might imagine lots of gothic imagery and references to the classic vampire story however in this particular tale, the name Stoker takes on a more literal interpretation. The word "stoke" means "to encourage or incite" and Charlie's arrival and subsequent actions certainly have this effect on India, to "stoke her" awakening in terms of her sexuality and possible family predilection towards violence.
As the film progresses the acts of sex and violence become intrinsically linked. There is one sequence which starts as a cliched scene of someone trying to wash away their sins that is given a devilish twist that brings to mind the French term for an orgasm "le petit mort", or "little death".
One of the most divisive aspects of the film has been Park Chan-Wook's mise-en-scene. Some critics have argued that the film is a case of style over substance but this is certainly no Terrence Malick film. The director's use of cinematography, sound design and Clint Mansell's score help to build an unsettling atmosphere and sensual beauty that prevent the film from tipping into melodrama and heighten the sporadic moments of ultra-violence.
The influence of Bram Stoker may not have been felt in the way many might have been expecting but there is another rather portly shadow cast over the film in the shape of Alfred Hitchcock, in particular his 1943 film Shadow Of A Doubt, with enough references to rival a Brian De Palma back catalogue.
In that film young Charlie (Teresa Wright) worries that her favourite person in the world Uncle Charlie (Joseph Cotton) is actually a killer.
Where Wright shies away from Cotton, in Stoker the revelations about Uncle Charlie only cause India to become more intrigued and attracted to her enigmatic relative.
This film might reveal it's hand earlier than Hitch would have but times have changed and he was more restricted with what he could and couldn't show. like its predecessor, this film succeeds on the strength of the chemistry between the leads and both deliver career-best performances.
Initially not that impressed with her in Alice In Wonderland, the talent Wasikowska has shown since has led this reviewer to mark that performance down to working within such a sterile CGI environment. Here she creates a complex character that is part Wednesday Addams and part Kevin a la the kind we need to talk about.
Matthew Goode, in the most difficult role, pitches it just right, never giving too much away behind that perfect poker face but oozing charm that lures India, Evelyn (an excellent Kidman) and the audience into wanting more.
Park, like Charlie, knows exactly how to seduce and manipulate his prey (in this case the audience), using every trick and tool at his disposal to cast a spell over them. It might not have the visceral impact or horrific sucker punch of Oldboy but Stoker is beyond a shadow of a doubt one of the year's most beautiful and haunting films.