As the year draws to a close, all film journalists/bloggers/fans like to procrastinate and list their favourite films.
Drawing up the top ten is always difficult because you normally battle back and forth over what films will miss the cut... but this year it has been tough to find ten films to put on the list!
I have said it before, and many people seem to have the same opinion... 2010 has been a pretty poor year in terms of quality. For every rare spark of originality like Inception, there was just further proof that Hollywood suffers from an over-reliance on sour sequels (Sex And The City 2, Iron Man 2, Predators), rank remakes (Clash Of The Titans, A Nightmare On Elm Street) and trying to create an 80's revival (The A-Team, Karate Kid, Wall Street: Money Never Sleeps, Hot Tub Time Machine) and the horrid reality that Jason Friedberg and Aaron Seltzer (Vampires Suck) continue to be allowed to make films
What follows is my Top Ten Films Of 2010 (which are films that had their UK release in 2010. Otherwise Black Swan would have been top of the list) plus a bunch of other random awards.
1. Inception
2. The Social Network
3. Toy Story 3
4. A Single Man
5. Scott Pilgrim Vs The World
6. Buried
7. Catfish
8. Shutter Island
9. A Prophet
10. Of Gods And Men
Best Performance - Ryan Reynolds in Buried
It's this year's Sam Rockwell in Moon performance in that it won't be recognised by any of the Awards ceremonies but Reynolds single handedly engaged an audience for 90 minutes whilst stuck in a coffin. He runs the entire spectrum of emotions and really connects with the audience to the point that you completely empathise with him come the conclusion of the film.
Honorable Mention - Leonardo DiCaprio for two great performances in Shutter Island and Inception.
Best Director - Christopher Nolan for Inception
The best blockbuster of the year: original, thought provoking, entertaining. Nolan should be praised for showing Hollywood that audiences are willing to embrace original films as long as they are made this well.
Best Screenplay - The Social Network
I would put my life savings (which isn't all that much but it's the thought that counts) on Aaron Sorkin winning the Oscar for Best Adapted Screenplay. He manages to recreate the sharp as a tack dialogue from The West Wing... but most importantly he makes a movie about Facebook genuinely thrilling and interesting.
Best Poster - (500) Films of Empire 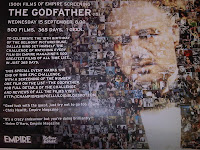 It is probably poor form to award the best poster to my own event but the guys at head office did such a wonderful job creating this image of The Godfather using pictures from every single film that I watched for the challenge.
Best BluRay/DVD - Scott Pilgrim Versus The World
A great film is given a first rate blu ray treatment with stunning picture and sound quality but also hours of bonus footage and FOUR audio commentaries that reveal the incredible level of detail and passion that Edgar Wright has invested in the best comic book movie of the year.
Guilty Pleasure - Piranha 3D
Storytelling and characterisation at its most basic, dodgy 3D effects and even dodgier acting but I'll admit that I really enjoyed this. It was ridiculous, but it worked because it knew it. It had a great Jaws spoof at the beginning, a gorgeous (and naked in 3D) Kelly Brook, and it was refreshing to see a horror film that took pride in having an 18 rating. Some of the deaths were so OTT that I was laughing out loud in the cinema (getting weird looks from other cinemagoers in the process).
Best Use of CGI in a movie - The Winklevii in The Social Network
Fincher (like Christopher Nolan) knows how to use CGI to enhance a storyline not become it, and it is still hard to believe that they are not identical twins but Armie Hammer's face digitally grafted onto another person's body in some scenes. Flawless.
Unfortunately the worst use of CGI was also in The Social Network, with some terrible CG cold breath left over from Titanic being used in an outdoor conversation between Eisenberg and Garfield.

Best Song - Black Sheep by Metric (from Scott Pilgrim Vs The World)
Honorable Mention: BRAAAAAAAHHHHHHHMMMMMMMMMMMM from Inception
Best Breakthrough Performance - Chloe Moretz in Kick-Ass
"Alright you c*nts, let's see what you can do know". Boom, a star is born. No other actor this year made such an immediate impact as Chloe Moretz did as the foul-mouthed, deadly but pint-sized assassin Hit-Girl. Slicing and dicing her way through a room full of drug dealers to the Banana Splits theme tune made her an instant fan favourite but with the remake of Let The Right One In, she has shown that she has the acting ability to become the next Natalie Portman or Jodie Foster
Best Cinema Audience - The Room
Not since the Star Wars special editions releases in 1997 have I seen an audience so in tune with a film that it turned a truly terrible film into a "must see" cult classic. Spoons were thrown, people screamed "You're tearing me apart" and everyone had a blast. Can't wait till we can screen it again.
Best Fight Scene - The hotel corridor fight in Inception
Full marks to Nolan for achieving all of this dizzying fight in camera, using old-school practical effects. Bonus points go to Joseph Gordon Levitt for doing 99% of the stunt work himself.
Honorable Mention: Hit-Girl's night vision goggle raid on the warehouse (cut beautifully to John Murphy's Sunshine score)
The "They don't make them like that anymore" Award - Back To The Future (re-release)
What Really Grinds My Gears - The "Avatar Effect"
Thanks to the financial success of Avatar, cinemagoing audiences have been forced to endure poor quality films (Alice In Wonderland, Titans, Last Airbender) being retrofitted with 3D which not only made the finished film look dull and lifeless but bumped an extra couple of quid on the already high ticket price.
Hopefully this trend has ended now that Harry Potter 7 refused to put out the film in 3D since it was ready yet.
Either film the entire thing in 3D from the outset or don't bother at all!
My Own Personal Favourite Cinematic Moment of 2010
When the end credits rolled on The Godfather that meant I had finally completed (500) Films of Empire.
Anyway let the debate begin. I am right in my views or have I got it completely wrong. I'm sure you will let me know if I have!
Posted by Dallas King at 16:08 2 comments:

BLACK SWAN - This swan is certainly no ugly duckling 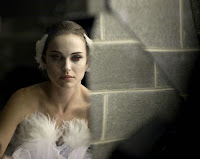 It would be perfectly normal to see a performance of Swan Lake greeted with a standing ovation at the climax of the show, but a standing ovation in a cinema is rarely seen outside of the Cannes Film Festival. However this is precisely what I wanted to give Black Swan when the end credits rolled on this fabulous film... but I didn't. I wasn't at a film festival, but in the middle of a crowded cinema in New York and I would have felt like a bit of an idiot clapping on my own!

In a year of overhyped cinematic disappointments, it was a delight to find a film that actually exceeded expectations, helped by the fact that I had only watched the teaser trailer and seen the gorgeous poster campaign.

Darren Aronofsky returns to the world of performance that he explored in The Wrestler but transfers the action from the wrestling ring to the ballet stage, examining the price that someone is willing to pay in order to succeed.

Natalie Portman plays Nina Sears; a young, up-and-coming ballerina who is picked to play the lead role in a new production of Swan Lake.
Whilst she is perfect for the fragile, innocent Swan Queen, her director (played with sleazy charm by Vincent Cassel) worries that she does not have the passion or sensuality needed to portray the Black Swan.
As Nina gets deeper and deeper into the role, she begins to lose her grip on reality, afraid that her understudy Lily is after her part, as she embodies the freedom and sexuality that Nina craves.

While The Wrestler was shot in the style of a documentary, Black Swan is a full blown, unashamed psychological thriller.

When I first saw the trailer, I thought the look and feel of the film as "if Polanski had directed a hybrid of The Red Shoes and Suspiria" and I wasn't wrong in my assumptions.
As Nina's darker side of her personality emerges, it manifests itself both mentally and physically as she is plagued by visions of a doppleganger and even undergoes some disturbing physical transformations in scenes that are a clear nod to David Cronenberg's The Fly.

Aronofsky delved into a nightmarish world in Requiem For A Dream and has crafted a film that slowly ramps up the tension to a point where this film is scarier than the majority of horror films released this year. The use of handheld camera creates a palpable sense of unease that trickles through the film like Nina's growing sense of paranoia and persecution.
By using the camera in this way, neither Nina or the audience are able to distinguish what is real and what is in Nina's head.

As Nina learns to become less inhibited, it triggers not only changes in her personality but also a sexual awakening: starting with seduction by her director, to pleasuring herself and culminating in the only scene this year that features Meg from Family Guy going down on Queen Amidala (and destined to become the main talking point of many reviews).
A lot of the film's humour comes from these scenes and the dialogue would not seem out of place in Showgirls, but it never descends into sleaze and that is due to the performances of the actors.

Natalie Portman delivers the performance of her career and must be the front runner for the Best Actress Oscar in February.
Like the ugly duckling that transformed into a swan, Portman undergoes a magnificent metamorphisis.
She begins the film as a placid, innocent "sweet girl". Her protective and domineering mother (played by Barbara Hershey in full-on Mommie Dearest mode) has denied her a proper childhood, instead putting all her focus into her dancing, in an attempt to live out her dreams through her daughter.
Until now Portman has done well with roles that captured her ingenuity like Leon and Beautiful Girls but this is her first truly grown up performance reaching a level of maturity and confidence previously hinted at in Closer.
Her final dance as the Black Swan is a truly mesmerising scene to watch and completely becomes the character, leaving the old Nina behind.

It would be a crime to review the film without commenting on the ballet sequences. “it’s been done to death, I know, but not like this. We’re going to strip it down and make it visceral and real” says Cassel's character early on in the film and that is what they have done with the choreography here, all beautifully underscored by Clint Mansell who also puts his own spin on the classic Tchaikovsky. Portman and Kunis deserve huge credit for doing the majority of the dancing themselves.
I will hold my hands up and say that I am not a huge ballet fan and don't know much about the technical side of it, but I became swept up in the story being told through the dance and was nearly shed a tear during the final number... and since I have never cried at a film that is a bold statement.

Portman's final line of the film is "I was perfect" and she was. I rarely use the "M" word to describe a film, especially a new release but Black Swan is that rare beast in Hollywood these days: A Masterpiece.
Posted by Dallas King at 11:24 No comments: