Can I just start by asking if it is written into law with the French Film Industry that in order for a film to be made, it MUST star Gerard Depardieu... he's in bloody everything. Sacre Bleu!
In many ways this is your typical by-the-numbers celebrity biopic that charts the many highs and lows, in this case many lows, of Edith Piaf.
What saves it from mediocrity is the performance of Marion Cotillard. Not only is she one of the most beautiful women in the world, has a voice that could make a wolverine purr, but was also the only watchable thing in the terrible musical Nine. She was certainly more deserving of an Oscar nomination for that film than Penelope Cruz.
Speaking of Oscar, she won Best Actress for her performance as 'The Little Sparrow' with the big voice, and she is truly astonishing as Piaf, playing her from a teenager to the frail women who died at the age of 48.
Now Oscar loves nothing more than when actors play real people and Piaf's life gives Cotillard the opportunity to express the entire range of human emotions from the joy of her initial success to the anguish of the death of her lover to the pain of her illness.
It also gives her the chance to 'make herself ugly' and undergo a physical transformation, which of course worked wonders for Charlize Theron in Monster.
In all the celebrity biopics out there, they always feature scenes where the person breaks down due to problems with drink, drugs, people, success, etc. You never see films about straight-edged celebrities who lived a nice quiet life and were a goody two-shoes. And why? Because it wouldn't make a very exciting movie. You need conflict.
The main conflict that I have now with this film is with Piaf's most iconic song 'Non Je Ne Regrette Rien'. The conflict lies in its use by Christopher Nolan and Hans Zimmer as the trigger song in Inception, especially as the film stars Marion Cotillard.
The film ends with this song and features images of Piaf on her death bed and because of the way my mind works, I was wondering when the 'kick' was going to come and she wakes up from the dream!
Top 5 acting performances by musicians
1. Mark Wahlberg in The Departed
2. David Bowie in Labyrinth
3. Will Smith in Ali
4. Justin Timberlake in The Social Network
5. Stacy Ferguson in Planet Terror
Posted by Dallas King at 11:47 No comments:

This film feels like an album brought to life, detailing the story and inspiration behind the songs in this tale of unrequited love between an Irish busker and a Czech immigrant that unfolds in an organic way that feels completely real and the songs provide a voice to the feelings and emotions of the characters that they cannot express normally.
Musicians Glen Hansard and Marketa Irglova both give natural performances and have a genuine chemistry that lifts the film to rise above what could have become a stereotypical romance.
84 minutes of feelgood film that you'll definitely want to watch more than Once (sorry).
Top 5 Songs That Were Robbed of the Best Song Oscar
Falling Slowly won the Best Song Oscar in 2007 but poor Marketa was robbed of the opportunity to say her thank yous by an over-zealous band and a production team running over, and what followed was one of Oscars sweetest moments as host Jon Stewart brought her back on stage later on to say thanks. Speaking of injustice at the Oscars, here are five songs which deserved to win over the bland generic winners. Stupid Academy!
1. Blame Canada from South Park: The Movie
What did win? You'll Be In My Heart by Phil Collins from Tarzan
2. The Power Of Love by Huey Lewis And The News from Back To The Future
What did win? Say You, Say Me by Lionel Richie from White Nights
3. Ghostbusters from Ghostbusters
What did win? I Just Called To Say I Love You by Stevie Wonder from The Woman In Red
4. Nobody Does It Better by Carly Simon from The Spy Who Loved Me
What did win? You Light Up My Life by Joseph Brooks from You Light Up My Life
5. Listen from Dreamgirls
What did win? I Need To Wake Up from An Inconvenient Truth
Posted by Dallas King at 06:19 No comments:

1001 Films To Watch Before I Die: The Wrestler

On the surface this could have just been another film in the long line of cliched sports films about a former great star who is given one final shot at the big time. Thanks to a terrific performance from its leading man and Darren Aronofsky's decision to take a pseudo-documentary feel to the cinematography means that it manages to transcend the cliches to create a genuinely affecting movie that is not only one of the best in the sports genre but also the best film about wrestling (but that probably isn't too difficult).

I will admit at the beginning that I was a huge fan of wrestling when I was growing up (and I still keep an interest in it despite being unable to follow it as much since I don't have Sky Sports at my flat). This meant that my enjoyment of The Wrestler probably differed from the average moviegoer who had no interest in the antics of Hulk Hogan et all.

And so I'll review the film from the aspect of a wrestling fan rather than a film fan. After all there are loads of reviews about the film. Check Rotten Tomatoes to read some of them.


During the nineties when the popularity of WWE/WWF (damn pandas) was at its peak, there was the debate about whether wrestling was "fake" and inspired more heated debates than whether Santa Claus was real or not.
Yes, wrestling is fake, in that the results of the matches are pre-determined but it is very real in terms of the punishment that their bodies go through during the matches. And to the credit of the film it doesn't shy away from these aspects. This expose into the "real" world of wrestling is the film that Vince McMahon would not have wanted you to see.
On one side we see the backstage conversations between the wrestlers as the plot out the matches and the big spots they will use to wow the crowds, then it is followed by the aftermath of a Extreme Rules match where they are getting stitches and superglued after using barbed wire and the old "blading" trick, complete with authentic "holy shit" chants.
Mickey Rourke is fantastic as Randy The Ram, bringing his own past into the role whilst echoing certain characters from the world of wrestling including the Ultimate Warrior and Ric Flair.
He shows the emotional and physical pain that wrestlers put their bodies through, sometimes long after they really should have retired and the fame is gone and they wrestle for a few hundred fans in a community centre.
It is the reaction from the crowd that drives them on, as witnessed in the final moving scene where Randy addresses the fans before wrestling one last match that might kill him. It is all the more painful when thinking of real wrestlers like Eddie Guerrero and Davey Boy Smith who died at a young age of heart attacks, possibly brought on by the pressures on their bodies and steroid use.

Here is the first top 5 list, obviously inspired by High Fidelity which also inspired the name of the blog, and not taken from the feature currently on BBC Film 2010!

Top 5: Performances by a wrestler in a film

1. Jesse Ventura in PREDATOR
This was a no contest in terms of the top spot, there could only be one winner and that goes to Jesse "The Body" Ventura. Not only is he as physically imposing as Arnold, but he actually became a US Governer before the hulking Austrian but he nearly manages to steal the film from him as Blain, a Navy Seal so hard that he carries one of the coolest weapons in the history of cinema, Ole' Painless: a friggin' chain gun that is normally attached to the side of a helicopter.
He also gets some of the best lines in the film including the immortal "I ain't got time to bleed".

2. Dwayne "The Rock" Johnson in BE COOL
The best thing by a country mile in a bad film that was a terrible sequel to the great GET SHORTY. The performance proved to Hollywood that he could act outside of the squared circle, but it wasn't too much of a stretch for him as he played a Samoan bodyguard who wants to be an actor and has a trick of raising an eyebrow. Well Elmore Leonard did write the character based on The Rock!

3. Rowdy Roddy Piper in THEY LIVE
He came here to chew bubble gum and kick ass and he's all out of bubble gum. One of the first wrestlers to make the crossover to movies after Hulk Hogan and he brings that fast talking sass that worked in Piper's Pit to this battle against an alien invasion which features one of the greatest fight scenes of all time.

4. Andre The Giant in THE PRINCESS BRIDE
Nicknamed the Eighth Wonder Of The World due to his size, he was never the most nimble of wrestlers but his bulk and presence were perfect for Fezzik, the hulking brute with a heart of gold in this fairytale classic.

5. George The Animal Steele in ED WOOD
The only performance on the list where the wrestler plays a wrestler, Steele played Tor Johnson who became part of Ed Wood's cast and crew during the years that would make such classics as Plan 9 From Outer Space.

So what do you think? Agree? Disagree? Mortified by the lack of Hulk Hogan on the list? Let me know, feedback always appreciated.
Posted by Dallas King at 15:41 2 comments: 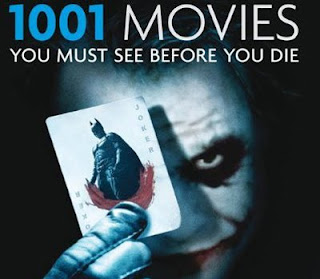 Well it has been two months since I completed the epic (500) Films Of Empire challenge... and to be quite honest, I have missed it!
I have been working so much recently that I've had hardly any time to watch and enjoy films, and that needs to change.
So I have decided to work my way through the 1001 Films To Watch Before You Die as my next foray into the film challenge world.
Now before you all tell me I'm crazy, I have a much better timescale for this one i.e. before I die, which I can only hope is a long time off yet. Also anything that I have already watched as part of (500) Films of Empire will count.
Every film watched will be reviewed and in the spirit of High Fidelity, I'll throw in a Top 5 list based on an aspect of the film.
Posted by Dallas King at 15:39 2 comments: