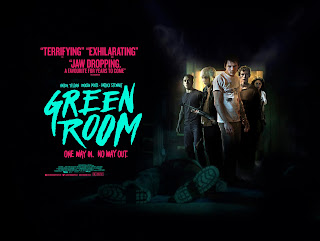 The date Friday the 13th is synonymous with misfortune, horror and a guy with a hockey mask. Replace the guy with the hockey mask with an evil Patrick Stewart and you have this week’s new release Green Room.
Following a gig in a Neo-Nazi bar, punk band The Ain't Rights find themselves in a Green Room that is witness to more horror and carnage than the aftermath of an Ozzy Osbourne or Justin Bieber gig.
Forget a bottle of Jack Daniels or 1000 brown M&M's in a brandy glass, the only thing on their rider is staying alive… and that is not a copy of the Bee Gees song either.
The band must survive the night and fight their way out in the hope that they might play one final encore. Patrick Stewart however, in a role that is more American History X than Professor X, is determined to stop them. In fact you could say he will “make it so” that they are a one hit wonder.
With all great horror films, writer/director Jeremy Saulnier wastes no time in effectively setting up the band dynamics before it all goes south and he ramps up the tension and violence all the way to 11 whilst shredding more nerves than guitar solos along the way to a bloody crescendo.
Having filmed Blue Ruin and Green Room, one wonders if Jeremy Saulnier will complete his own Three Colours trilogy with a red-based film. Perhaps Red Rum? A sequel to The Shining or a biopic of the Grand National-winning horse maybe?