Dead In A Week (Or Your Money Back) - EIFF review 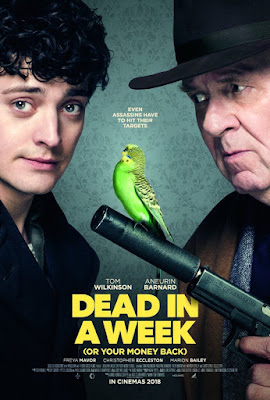 Dead In A Week (Or Your Money Back) is the blackest of black comedies that attempts to prove that suicide is painless… or at the very least, very, very funny.
Yes, there may be some audiences that are horrified by the idea of a film making jokes about a very difficult, emotional and topical subject matter. However those people probably haven’t actually watched it because the film manages to walk the fine line to handle the issue of ending one's life with sensitivity, care, humour and also how at the darkest moments in life, there is a chance to turn everything around. With the help of the right people.

One night struggling writer William, played by Aneurin Barnard (Dunkirk), attempts to end his life by jumping off a bridge. As he stands there hesitating, he is approached by a mysterious shadowy figure who offers him some assistance.
After the attempt fails (it turns out this is his ninth - if you include the cries for help), William meets with Leslie (Tom Wilkinson) who explains that he is a hitman and will be able to take the stress out of ending one's life for a small fee.
After signing on the dotted line, William receives interest in his book about suicide from a publisher and editor Ellie (Freya Mayor). Turns out he might have a couple of reasons to live for now but will Leslie be happy to cancel the contract?
What sells the film is the fully realised world that writer/director Tom Edmunds has created. Leslie works for a company of assassins and hitmen that present themselves as a legitimate business. They have brochures, away days for training and quotas to meet. It's like a British branch of the assassin's guild from John Wick.
Wilkinson's character is getting on a bit and faces retirement if he is unable to meet his quota for the year and William's contract is all that stands in his way.
Edmunds balances the two storylines perfectly; a young man wanting to end it all while an older man faces the end of his own life as he knows it. The performances from Barnard and Wilkinson are exceptional and pitched perfectly to sell the concept and make the audience empathise with both men.
There is also excellent support from Marion Bailey as Leslie's wife Penny and a scene-stealing cameo from Christopher Eccleston as Leslie's boss Harvey. Yes, he might be doing the standard British-thespian-as-a-gangster role which means doing their own take on Ben Kingsley's Sexy Beast performance (see also Ralph Fiennes in In Bruges) but who cares when it is this hilarious?
Dead In A Week should lead a long, happy life in cinemas, on DVD and streaming and is one film that won't have you asking for your money back.

Listen to interviews with Tom Edmunds and Freya Mayor from the Edinburgh International Film Festival on the Filibuster podcast here at The Nerd Party.
Posted by Dallas King at 00:16