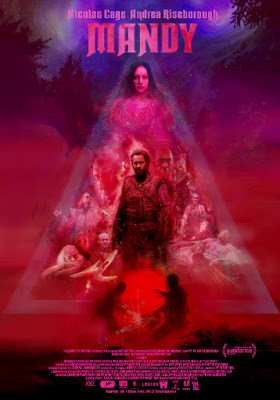 They say there is a fine line between genius and madness. If that is true then Nicolas Cage has been tightrope walking along that line his entire career. He more than often slips off it and takes a tumble but bless him, he just gets right back up on that line and continues moving forward. Kind of like a shark, he never stops moving forward. It is true that he had made his fair share of absolute stinkers in his time... but every now and then there comes a performance that is worthy of the talent that brought us Wild At Heart, Leaving Las Vegas, Adaptation, Con Air and Kick Ass.
Thankfully Panos Cosmatos's Mandy is very much on the side of genius and showcases Cage at his very, very best.
It was rumoured that initially, Cosmatos offered Cage the role of cult leader Jeremiah Sand (Linus Roache) but he turned it down, preferring to play Red Miller instead. It is easy to see why Cosmatos went down this road intially. Watching the character of Sand, it would have allowed Cage to do his bug-eyed, wild ride shouting and screaming act he has done ad nauseum. Instead the character of Red taps into the quieter, more introspective Cage that he has channeled in Joe and Bringing Out The Dead.
A lumberjack who is handy with a chainsaw (this may prove handy later on similar to the way Ripley operated a Power Loader in Aliens), Red is completely in love with his girlfriend, the enigmatic artist Mandy (Andrea Risenborough) but tragedy ensues when she catches the eye of Sand's cult leading to them employing a crazed, demon biker gang to instigate a home invasion. Her abduction is what flicks the switch in Red and allows Cage to slowly dial up his performance all the way to 11 by the final reel.
The entire film is shot like an LSD-fuelled hallucination or fever dream and once it finishes, audiences may indeed question if what they watched had actually happened.
The cinematography is out-of-this-world, using all sorts of tricks, filters and exposures to create the effect that you are under the effect of a waking nightmare. Amplified by Johann Johansson's final score that is full of 80s synth and bass notes so loud they threaten to shake the speakers off the walls of the cinema auditorium.
Mandy is one hell of a trip and certainly not for everyone. At times, it is reminiscent of the work of Nicolas Winding Refn but if someone had taken the pristine sheen of his 35mm print and dragged it across concrete.
As Barry Manilow might have said:
"Oh Mandy, you came and you certainly ain't faking. Those images won't go away, oh Mandy.
Oh Mandy, Nic Cage's performance left us shaking. You need to watch this today oh Mandy"