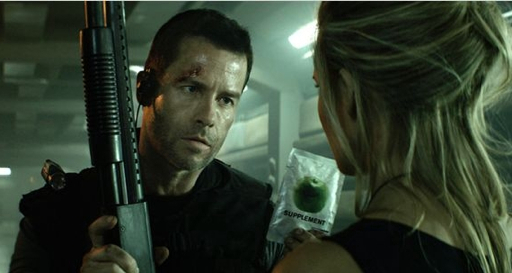 The pitch for Lockout, a film about a former CIA agent called Snow who is forced to gain access to a maximum security prison (in space!) in order to rescue the president's daughter who is trapped there following a mass breakout, probably included the phrase "Escape from New York meets Demolition Man... IN SPACE!".
Lockout never tries to hide away from the fact that this film is a hark back to the dumb, high concept action movies of the Eighties, and it certainly has a lot in common with them. A plot that can be described in terms of other movies, action set (prodominantly) in a single location, a sardonic anti-hero, a British villain (in this case two brothers giving the Scottish a bad name, with Joseph Gilgun on scene-stealing form), and some CGI graphics that would not look out of place in an Eighties computer game. Yes, that last part was not meant to be a compliment.
Along with the awful CGI, the direction is rather pedestrian and the film lacks any truly spectacular action sequences that would allow the film to rise above it's schlocky origins. Thank goodness then for Lockout's trump card... Guy Pearce.
Back then this type of genre flick would have starred the likes of Seagal, Van Damme, Norris or any of the stars of The Expendables. Made today, it would normally have starred Jason Statham. Instead the filmmakers have gone down the Kurt Russell route by casting someone against type.
It would be fair to say that Pearce is known for his more serious roles in the likes of L.A. Confidential, Animal Kingdom and The Proposition but here he shows a welcome new charismatic side full of humour and sass. Snow is as capable of cracking wise as he is at cracking skulls and he brings a weary cynicism to his mission, especially when interacting with Emily Warnock.
Maggie Grace once again is in need of rescue (she is as bad as Kim Bauer from 24), that it is a surprise that Liam Neeson isn't playing The President.
The scenes between Pearce and Grace are among the best in the film, with them sharing good chemistry as Snow casually mistreats Emily in order to get her out alive.
Lockout is no Casablanca, despite Pearce's Bogart-like cynicism and a final scene that does its best to evoke similarities, and is unlikely to appear on many people's Top Ten end of year lists or start a trend of remaking 80's genre films in space but thanks to Pearce it makes for an entertaining diversion on a Friday night at the movies, which sometimes is just what we need.