Wrath Of The Titans review 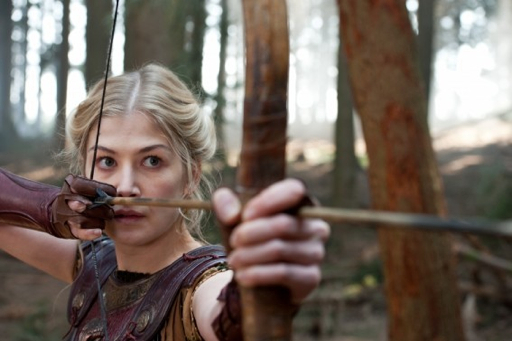 Pike was gutted to miss out on the role of Katniss Everdeen.

When Clash of the Titans was released in 2010 it became the poster boy for the backlash against 3D. It's dark, murky, sloppy post-conversion reeked of 'cashing in' over 'creativity'.
It could possibly have been forgiven if the 3D conversion had been used on such elements as plot, acting, script and character development. Then of course there was the fact that no titans actually clashed during the original film.
But it made enough money at the box office to merit a sequel and it offered the producers the chance to correct the mistakes that were made first time around.
Sadly it quickly becomes apparent they haven't learned anything.
Wrath Of The Titans is once again post-converted into 3D and doesn't look like it has added much to the film. In fact the 3D spectacularly failed around 20 minutes into the film during my screening, forcing me to watch most of it without my glasses and a lot of it looked 2D to me. One shot near the beginning with the initial Chimera attack even featured a ratio change with visible black bars at the top and bottom which is very poor for such a major release.
There is a story in there somewhere but essentially this, like Harry Potter And The Deathly Hallows Part 1, is "the one where it goes a bit Lord Of The Ringsy".
Perseus must gather up a fellowship (well two people anyway) to help him travel to Mount Doom (the Titan prison of Tartarus, otherwise known as the God of Plaque) in order to rescue the White wizard Gandalf (Zeus) before slaying the Balrog (Kronos).
Once again Titans is found to be sorely lacking in the fun factor but perhaps not surprising when your lead character is played by Sam So-Not-Worth-It-Ton, whose Perseus has now adopted an Australian accent to throw into the mix of various regional English, Irish and Spanish accents featured in the film.
The script gives the actors very little to work with, perhaps why they didn't bother putting on an accent, and character development is practically non-existent.
One such example is when Perseus kisses Queen Andromeda at the end. There has been no build up to this moment, no hint of romance between them but because Gemma Arterton couldn't return for the sequel, lucky her, her character has been written out of the film and it feels like a producer has watched a rough cut and demanded some romance so they have tacked on a kiss that feels completely out of place.
That sort of filmmaking by committee feeling hangs like a giant ash cloud over the whole film and, ironically for a film about the fall of the gods, I will be preying to them that we won't be seeing any more additions to the Titans series any time soon.