The LEGO Movie 2 - The Second Part 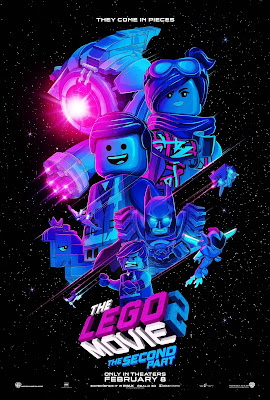 In The LEGO Movie 2: The Second Part, there are continual references to the fact that five years have passed since the events of the original movie and it wasn't until about the third or fourth reference that it finally sunk in that it has actually been five years since the world discovered that the jokey idea of a movie based on LEGO proved that everything was indeed awesome!
However can they recapture lightning in a bottle and "build" on the success of the first one?
Well, YES... and no.
Having been banished into the Mad Max: Fury Road-esque Apocalypsberg after the continued attacks from the beings of Duplo Land, the remaining Master Builders are kidnapped by the Queen of the SISTA system and Emmett must learn how to grow into a tough, grizzled hero in order to save the day, ably assisted by Rex Dangervest.
While the Second Part may lack the surprise factor of the first film, similar to the way you cannot recapture that feeling of that first time you complete building your LEGO Dark Knight Tumbler, it does have some magic and meta touches to it. That actually lead to a very touching finale.
The major surprise in the first film was when Emmett transferred from the LEGO world into the real world and it was discovered that everything was being controlled by human beings and the second part cleverly builds on this.
It is not going to be a shock to anyone on how the "SISTA system" and "ArMamageddon" come into play in the third act but it is a rather moving storyline that shows the true power of LEGO, playing and creativity.
One of the creative choices that is inspired and a complete joy, is Chris Pratt's decision to play the character of Rex Dangervest as his dad in Guardians Of The Galaxy Vol. 2, Kurt Russell in his iconic role of Jack Burton.
Just like the new song that repeats ad nauseum, this movie will get inside your head and leave you with a massive smile on your face because the jokes are on point, the vocal performances are infectious and it is just a hell of a lot of fun.
LEGO, essentially a pile of random bricks, is only limited by people's imaginations and while it might not be as imaginative as the original, it is still a lot of fun and proof that everything is still pretty darn great... if not quite awesome.