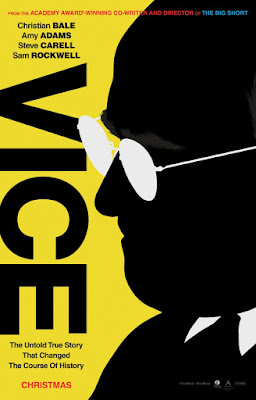 Adam McKay actually foreshadowed his work on Vice back in 2004 with his breakout comedy classic Anchorman. In the final moments of the film, the narrator informs the audience that Brick Tamland would go on to become one of the top political advisors... to the Bush administration.
Fast forward to 2019 and we have Steve Carell playing Donald Rumsfeld, Secretary of Defense for George W. Bush. Now that is one hell of a long game payoff for a gag.
That is just one small way of indicating to the audience that this is not going to be your standard rags-to-riches, rise and fall Oscar bait biopic (albeit one that has been nominated for 8 Oscars).
What McKay attempts instead is to try and give audiences some understanding of who Dick Cheney was as a person and the circumstances that led to him becoming, arguably, the most powerful man in the world and the puppet master behind Dubya.
This is achieved using a similar style to his Oscar-winning The Big Short, which tried to explain how the 2008 financial crisis occurred. There is narration from a third party, cutaways, flashbacks, Shakespearean soliloquies and even a wonderful premature end credit sequence where Cheney lived happily ever after and never entered politics again... before Bush calls him to be VP.
Compared to The Big Short, Vice comes up a little short in terms of the visual impact of its storytelling but what it does have is a true powerhouse of a performance from Christian Bale "channeling Satan" to become Dick Cheney.
Propped up by his devoted wife Lynne (Amy Adams), they are like a real life Frank and Claire Underwood as they plot and scheme their way to absolute power.
Bale is so good in the role that he simply disappears and becomes Cheney, and goes as far to make this reviewer doubt himself and nearly come away thinking, "well at least Cheney did have one redeeming quality, he was a devoted, loyal family man"... but then right at the end he shows his true colours!
Cheney might not have ever had the top job in US politics but there is a very good chance that Bale will take top honours on Oscar night.
Vice, like a drug, shows that power is an addiction but just like narcotics, it lures you in, gets you hooked but ultimately needing and wanting more from it.