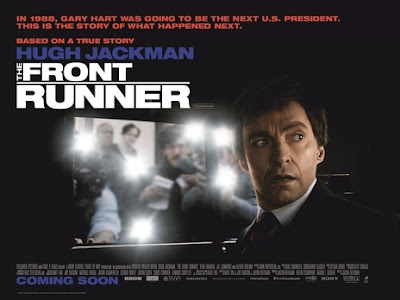 1988. Ah, the halcyon days of US politics. When the press publishing rumours of a reported affair was enough to have a candidate drop out of the race.
That is not a spoiler. It is the crux of this true life story of Senator Gary Hart. America's golden boy. The titular "front runner" for the Democratic nomination and the man many believed was capable of beating George WH Bush and be the next President... Unfortunately the man just couldn't keep it in his pants!
Jason Reitman's expose of this story is about more than just one man however. This captures a monumental turning point in how the press and the media reported on politics.
Gary Hart's position was that his private life behind closed doors did not affect his ability to perform his job or influence his policies. It was a view that until that point many agreed with, including the likes of The Washington Post (which actually makes for an interesting double bill with The Post), but there were others that believed that politicians needed to be held to a higher ethical and moral standard than others and if you were in the public eye, you were fair game.
Jackman is terrific as Hart. Using his natural charisma and abundance of charm to be the man who could be President when talking about policies (or women) but is equally stiff and awkward around cameras, with his frustration and anger reaching boiling point.
Reitman fills out his cast with regulars such as JK Simmons (once again on fine expletive dropping form), Vera Farmiga and a host of talent that would slot quite easily into a walk and talk segment on The West Wing.
However this is where the film finds itself lacking. It seems churlish to compare and contrast but while it does a perfectly adequate job of retelling the story in the style of a 70s/80s political drama, what it really needs (with the monumental change in the focus of the media at the time) is the satirical bite and razor sharp wit of Aaron Sorkin or In The Loop or The Thick Of It. Satires and comedies that have become worryingly more like documentaries.
On paper, this movie had everything you would for in a prestige Awards season film (great cast, seasoned director, based on a true story, timely political statement), however just as Gary Hart found out to his cost, sometimes that is just not enough and you go from The Front Runner to Also Ran in a heartbeat.