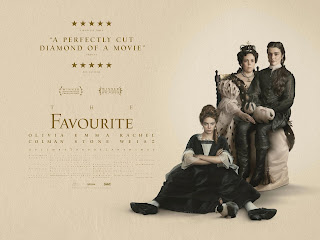 Similar to the main characters jostling for the affections of the Queen, The Favourite is currently living up to its title as one of the favourites for this season's Oscar race but one expects it will not have to lower itself to such underhanded tactics as Sarah and Abigail resort in order to curry favour with the voters.
Director Yorgos Lanthimos (The Lobster, Killing Of A Sacred Deer) brings his trademark sense of humour which is blacker than the Black Death to this acerbic retelling of this historical menage a trois.
The way that Abigail (Emma Stone) and Sarah (Rachel Weisz) scheme and play each other off Queen Anne in a continual battle for her affections, position and power makes it feel akin to the classic All About Eve. If the film had been about another famous Anne, it could have been called All About Cleves.
Queen Anne has a collection of bunnies named after her lost children and the metaphor runs deep as Anne herself at times feels like a frightened rabbit at the mercy of two cunning foxes stalking their prey, albeit too obsessed with fighting each other to truly go in for the kill.
The scenes between Stone and Weisz are electric. Trading witticisms, backhanded compliments and insults as barbed as Negan's baseball bat Lucille from the Walking Dead, and twice as dangerous.
Colman excels as the Queen who is portrayed in public as weak, stupid and cuckolded by Sarah but as the film progresses, questions are raised as to who is really playing who? This leads to an incendiary fallout in the conclusion and an audacious final shot from Lanthimos.
All three women will almost certainly be nominated for awards but it seems a disservice to have them face off against each other (ironically). They are equally great and arguably all leads in a film that aces the Bechdel test to the point the audience forgets that there are actually male characters as well (something the women seem as disinterested in at times). Of these, Nicolas Hoult is the standout as Harley, a man who has schemes of his own afoot.
A period piece as sumptuous to look at and full of romance as a Jane Austen novel but with a cut-throat sense and sensibility more often seen in Game of Thrones.