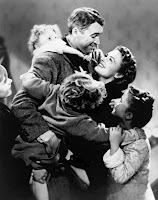 195 - It's A Wonderful Life - 5 stars
I have been very cynical about this film in the past, wondering why it is so many people's favourite Christmas film, "It's about a guy who wants to commit suicide, not very feel-good is it?". This coming from the man whose top 3 Christmas films are Die Hard, Gremlins and Muppet Christmas Carol!
I now feel kind of stupid after watching it on Monday night to realise that I had only ever seen the last 30 minutes! I cannot truly judge a film when I haven't watched all of it, can I? Yes I can, I know any spoof film called Epic Movie etc will be crap.
This film seems to have a much greater significance this year than most due to its storyline. Here the owner of a Buildings & Loan loses $8000 due to employee negligence and has to be bailed out by the public. Sound familiar? He even contemplates suicide at one point. I wouldn't have been surprised if the audience had shouted for him to jump!
But they wouldn't have, because its Jimmy Stewart. He was cinema's lovable everyman but in this film, I think his first back from serving in WWII, he displays amazing range; goofy to passionate, caring to despair, even anger - witness the scene where he shouts at his wife and kids. This is arguably his greatest performance, which previously I had thought was Vertigo.
I really empathised with George Bailey. Putting his life on hold to support the family, desperate to get away and make something of himself but hopes dashed at every turn. No wonder he loses it completely when everything falls out from under him.
This is where Clarence comes in. George's guardian angel shows him what life would be like if he'd never been born at all. Pretty rubbish for everyone involved its safe to say!
So he dashes back in time for the business to be saved and a good old sing song round the Christmas tree.
I have said before that I've been looking for a film to make me cry and this one nearly had me blubbing like a baby. After a pretty rubbish year where the new Mr Potter-esque 10 screen Cineworld opening has halved our takings, it has been a constant struggle to survive and the weight of it all nearly got the better of me.
This was the second film I had seen this week that got a round of applause at the end (Avatar was the other one). I'd like to think that the applause was for The Belmont for putting it on, as there were no members of cast and crew present!
There is one unresolved issue though? Whatever happens to Mr Potter who took the $8000? Does he get his commupence?
Days Remaining - 268 Films remaining - 364
Posted by Dallas King at 14:55