Drive premiered at the Cannes Film Festival back in May where it was met with near universal acclaim and won the Best Director award for Nicolas Winding Refn. Since then it has been touted by many critics as their "Film Of The Year".
I always worry when films receive such a high volume of praise, because it is then difficult for them to live up to such lofty expectations (The Guard springs to mind here)... but I am delighted to inform you that Drive is one of those rare occasions where you can believe the hype. It is quite possibly the film of the year and definitely the coolest, leaving all other contenders in its dust.
Originally planned to be in the same vein as Fast & Furious, thankfully when Gosling and Refn came on board they decided not to betray the source material's pulp fiction roots and have crafted a thriller that is lean, mean, fast and as cool as a (insert appropriate car here).
Man crush of the moment Ryan Gosling is the unnamed Driver of the film. Whether it is doing stunts for movies, acting as a getaway driver or just driving around at night, that he who he is. No more, no less. His character can be likened to The Man With No Name in the Leone films. It is a very underplayed performance by Gosling, he has minimal dialogue, preferring to let his face and body language tell the story, and his grey satin jacket with a scorpion motif will be as iconic as Eastwood's hat and poncho. You can imagine him arriving town, taking down a score or helping a damsel in distress before riding off into the sunset, but in this case he doesn't use a horse but a Dodge Cavalier instead.
I think it was Godard who said "all you need to tell a story is a girl and a gun" and this is true for Drive... if you substitute "gun" for "claw hammer", fast becoming 2011's weapon of choice (see also Kill List, ).
Suffice to say our driver gets mixed up with a pretty girl (Carey Mulligan) and his quiet, controlled life quickly spins out of control and the road to revenge is peppered with pitstops of extreme violence. Is that enough driving puns?
Refn fully deserves the praise coming his way and his shiny award from Cannes. There is not a single moment of the film where he is not in complete control of what is one screen. He draws great performances out of his actors (Albert Brooks proving that sometimes comedians can do menacing better than the rest), knows that a lingering look between Gosling and Mulligan says more than any dialogue could, when to hold a shot and when to cut away, and as exemplified on BBC Breakfast, he knows that building to these sudden bursts of violence is very important, the lift scene a prime example. Backed up with stunning cinematography that gives Los Angeles a sheen that it hasn't had since Collateral and a terrific electronic soundtrack by Cliff Martinez that is destined to be downloaded by moviegoers straight after the film, Refn looks to be the complete filmmaker and I for one am very excited about his future prospects.
So grab your toothpick, sit down and fasten your seat belts because it's going to be one bumpy, but sizzlingly cool, night at the Drive-In for, yes I'm saying it too, The Film Of The Year. 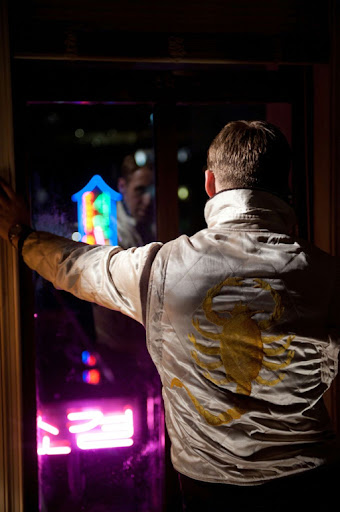