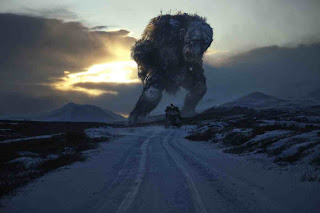 The problem with the "found footage" film is that by its very nature, the ending is predetermined. The fact that someone has mysteriously discovered some lost footage and "edited" it together to make a semi-coherent piece of film implies that things didn't work out too well for the person/persons behind the camera. For example: Cannibal Holocaust, The Blair Witch Project, Cloverfield, Paranormal Activity, Apollo 18, the list goes on and on.
Whilst all of these films are typically very low-budget and will feature at least one "running around screaming shaky cam" moment, the trick is to make them entertaining. As James Cameron said about the likes of Titanic and Apollo 13 where the ending is already known, "it's not about the destination, it's about the journey".
And in this respect, Troll Hunter is easily one of the most enjoyable films in this particular genre.
Starting off in a similar vein to Blair Witch it follows a group of Norwegian students looking to film a story on local bear attacks but stumble upon a secret. The government uses "bear attacks" to cover up the existence of Trolls.
At this point the film could have gone down the cheap and easy horror route and have them spend the next 70 minutes running around the woods in the dark trying to escape trolls... they only do this in one scene. Instead the film plays out like a weird mix of Brother Grimm meets The Office.
It's success lies in the character of Hans, the country's number one Troll Hunter who becomes the students focus for their documentary. They follow him on his rounds, whether it be figuring out why certain trolls are migrating or having to put down a troll that is endangering local people. Hans is "getting too old for this shit" and is a wonderful counter balance for the three wide-eyed students who are amazed at the existence of these mythological creatures, he has the demeanour of a man who has "been there, done that", and much of the film's humour derives from his interactions with the students and his prey.
At 95 minutes, the film zips along at a good pace, there is some subtle character development (which is rare in this type of film) and a surprising amount of action (and trolls) for a film of this budget.
Although it is Norwegian, subtitles shouldn't prove too much of a distraction as "troll" is the same in both languages!