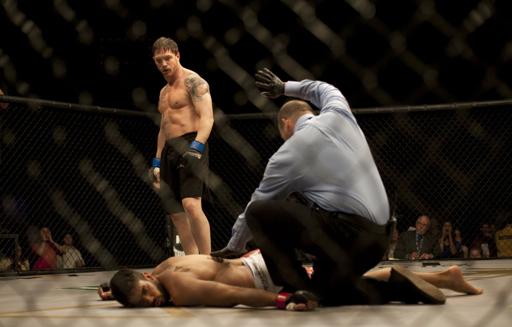 From the trailers and tv spots, it would be easy to assume that Warrior is just another typical sports movie that adheres to every cliche that you find in every instalment of the Rocky or Karate Kid series.
And for 120 minutes you could argue that it does. But by the time we get to the final of the tournament, we are so emotionally invested in the family dynamic and what it means to both men to win that Warrior delivers a knockout emotional sucker punch that may leave grown men weeping in the aisles (myself included).
Warrior centres around the increasingly popular world of MMA (Mixed Martial Arts) and a tournament to determine the best in the world called Sparta (I can't help but feel they missed a trick by not having Gerard Butler involved to welcome people to the fights).
Where this film differentiated itself from the pack is that instead of following one combatant on the road to glory, we are following two... and they're brothers!
Much like The Fighter earlier this year, Warrior uses the sports genre as the backdrop for a story of a family that is torn apart and this tournament just might be the thing to bring them together.
Tommy (Tom Hardy) is a former marine, built like a brick shithouse and complete raging bull with a punch that could knock out an elephant. Brendan (Joel Edgarton) is a former UFC fighter turned family man and teacher. They haven't seen each other in years and both are estranged from their former alcoholic and domestically violent father (Nick Nolte on terrific form), but this tournament sets them on a path to face each other and their issues.
It is not spoiling anything, it's even in the trailer, that the two brothers will meet in the final of the tournament, but it is a testament to the filmmakers that they still manage to bring a level of tension and excitement to the individual fights despite the sense of inevitability, thanks to an authentic, frenetic energy to the camerawork.
Faultless performances from both leads mean that our loyalties are split come the time the bell rings for the final and the outcome of the fight is impossible to call.
To paraphrase the tagline of another epic matchup film, "Whoever wins, we lose... our dignity in the screen. I'm sorry, give me a minute, I have something in my eye".