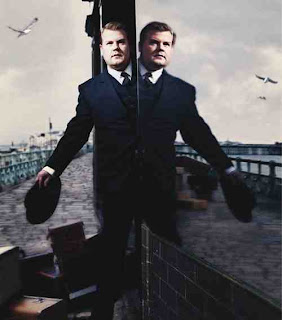 Alternative content i.e. live satellite screenings of operas, concerts and theatre, are now big business for cinemas. Offering the chance to see sold out or one off performances at premium ticket prices is both an attractive and lucrative programming choice for cinemas these days.
Earlier this year I had the chance to see Danny Boyle's Frankenstein with Benedict Cumberbatch and Jonny Lee Miller live via satellite and it was a terrific show but spoiled by transmission problems (a hazard of live productions).
Thankfully now that the future of The Belmont Picturehouse was secured, they have invested in upgrading their satellite equipment and on tonight's results it looks like these problems are now a thing of the past.
And a good thing too because One Man, Two Guv'nors was one of the best evenings I've ever spent in a cinema... which is odd because it wasn't a film that I was watching. Instead it was one of the funniest pieces of theatre I've ever seen, made all the better by being transmitted live.
The camera work by the NT was excellent and really got you close to the action that you wouldn't be able to get from sitting way back in the stalls. It was used to great effect when James Corden's character Henshall has an argument with himself and the camera cuts back and forth from two different angles in a similar way to the famous conversation between Gollum and Smeagol in LOTR: Two Towers.
But all that would count for nothing if the play wasn't any good and I can honestly say that I have laughed that much in a cinema screen since South Park The Movie. Tears were literally rolling down my cheeks (ask the people sitting next to me if you don't believe me).
One Man, Two Guv'nors is adapted from the Italian "Commedia del Arte" Servant of Two Masters from 1743 and set of Brighton in 1963 were failed Skiffle Band member Frances Henshall (James Corden) ends up working for two rival mobsters and tries to keep the two from finding out about the other.
It is a classic old school comedy of errors as Henshall sinks deeper and deeper into trouble as he attempts to keep both Guvnors sweet, mainly due to the fact that he is not the sharpest tool in the box.
I'm going to hold my hands up now and say that I wasn't a huge fan of James Corden before tonight. I thought the Horne & Corden show was terrible, the whole Gavin & Stacey thing kind of passed me by and I avoided Lesbian Vampire Killers like the plague. But tonight my opinion did a complete 360, Corden was absolutely fantastic, easily coping with both the verbal and physical sides of a very demanding (and exhausting) role which included a lot of interaction with the audience, both narrating his worries and breaking the fourth wall completely and bringing people up on stage to help cover his tracks. Perhaps his true talents belong on the stage as he worked the entire auditorium, having them in the palm of his hand and they loved his little asides and knowing glances to them. It was delightful to see him try to stop himself "corpsing" on stage when Oliver Chris (who nearly stole the show as Guvnor #2 Stanley Stubbors) stitched him up a treat with an ad-libbed "oopsy-diddly-daisy-do" when Corden dropped a bottle. Again it was one of the joys of seeing live theatre, something you just don't get with a film., no matter how good it is.
The script is very tight, hilarious, and outstandingly performed by the entire cast and has a wonderful rockabilly soundtrack performed by a band that captures the feeling of the show and entertains during the interval and scene changes.
Overall, this was one of the best (and by far the funniest) pieces of theatre I have seen and would throughly recommend trying to catch it if there is an encore screening at The Belmont Picturehouse soon.
Based on the audience numbers and feedback from tonight's performance (and the bonus fact that you can now enjoy a drink in the screen), I would say that the future is very bright for this new thread of alternative content. Indeed I will be there on Sunday October 2nd for the 25th Anniversary of Phantom Of The Opera live from the Royal Albert Hall.
Now if you'll excuse me, I'm off to look into buying tickets for One Man, Two Guvnors at the King's Theatre in Edinburgh at the end of October. These cinema screenings may be "the next best thing to being there" but if they are going to be that close to Aberdeen I might try "the best thing" too!
Posted by Dallas King at 14:35