The Adventures Of Tintin - review

This is the first of several planned Tintin films by Steven Spielberg and Peter Jackson and is an amalgamation of three of Herge's stories The Secret of the Unicorn, Red Rackham's Treasure and The Crab with the Golden Claws, but more appropriately it could have been called Tintin And His Attempt To Escape The Uncanny Valley.
There was a lot of debate amongst fans of the books when it was first announced that the film would be produced using motion capture rather than animation.  You can understand its purpose when it encorporates otherworldly or non-human characters into live action films (Na'vi, Gollum, Caesar, etc) but when the style is that close to animation, is there any real benefit?
The answer, unfortunately, is not really.
The main benefit of using mo-cap over voice work is that you can use the actor's whole performance and therefore choose actors whole will bring something to the part, but the likes of Simon Pegg, Nick Frost and Jamie Bell are fairly anonymous in their portrayals, adding little more than a star name on the poster.
I don't know if it was Bell's fault, the script or if the character is the same in the comics, but Tintin was almost a non-entity in the film.  He's one dimensional as the sketch he is given at the beginning of the film based on Herge's drawing.  If you aren't familiar with the comics then the only character development we get as an audience is that he's a reporter (of undetermined age) who has a dog called Snowy.   That's it, otherwise he is just there to move the plot from A to B.  As adventurer's go, Indiana Jones he is not. 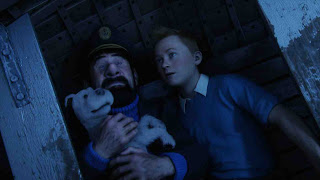 Rather unsurprisingly, the only one to be as three dimensional as the impressive visuals is Captain Archibald Haddock, thanks to being played by the King of Motion Capture, Mr Andy Serkis.  Although I can't be the only one who thought Haddock shared more than a passing resemblance to producer Peter Jackson.  It may not be as impressive a performance as that of Caesar from ROTPOTA, but Serkis is clearly having a ball as the drunken, boorish Scottish seaman (snigger) who comes to learn that his destiny lies along a different course... but perhaps Serkis was just happy at not having to play Snowy the dog!
Spielberg first became aware of Tintin back in 1982 when film critics compared elements of Raiders of the Lost Ark to the boy reporter's series of adventures, and this film is more in keeping with the tone and feel of Raiders than Kingdom of the Crystal Skull.
Exotic locations, missing treasure and artefacts, non-stop action, and of course, a terrific John Williams score.  The film excels during some stunning action sequences but it's a shame the script doesn't masure in terms of the vision which is disappointing considering it was written by such talented guys as Moffat, Wright & Cornish.
Spielberg demonstrates why he is one of the best directors of all time with a chase sequence through the port of Bacchar that is done in one complete shot and rivals the truck chase in Raiders or the mine cart chase in Temple of Doom for sheer excitement.
With CGI and motion capture, what can be achieved on screen is only limited by imagination, and Spielberg shows how good he is with Haddock vividly recounting the tale of his grandfather and Pirate Red Rackham as it seamlessly switches between flashback and present day.
If the script and characterisation can match the imagination, passion and vision of messers Spielberg and Jackson, then I'm prepared to give Tintin another shot... as long as the sequel doesn't involve aliens!