I'm sure I have heard and read about several actresses complaining that there are "no good roles for actresses these days", that is either the romantic lead or the frumpy best friend, and sometimes the two are not mutually exclusive. 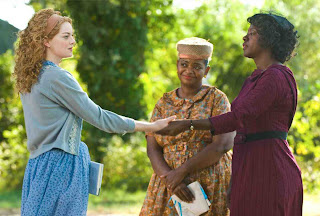 But after seeing The Help, I can conclude that these actresses must not have read the script for it, auditioned for it, or seen the finished product, as there at least 8 well written and strong female characters in it.
It is the estrogenic counterpoint to Tinker Tailor Soldier Spy, which was criticised in some quarters for not having many female characters in it (the same now goes for Tintin too), as The Help features only a handful of male roles in it.  Somewhat ironically then, you could argue that the biggest role, a love interest for Emma Stone's character, feels tacked on and unnecessary and if cut out, could have improved the film if not just the overlong running time.
Some people out there will be quick to label this tale of a young white woman interviewing black maids in the Deep South of the USA for a tell-all expose during the early sixties as "an issue movie" and move on.  Yes, it deals with the touchy subject of Civil Rights, but this is certainly not Crash.  That Oscar winning yet incredibly overrated film repeatedly used a sledgehammer to reinforce its point that "Everybody is a little bit racist" over the course of two hours when Avenue Q did it in less than four minutes.
The Help was not actually based on a true story, as I initially though, but it does have an authenticity to it and yet it is hard to believe the attitudes and behaviour of some people back then.  The ignorant racism that was rampant back then is still shocking (although due to the 12A rating it shies away from the more physical brutality that many face) and is given a face in the form of Hilly Holbrook (played with relish by Bryce Dallas Howard).  She is like a Stepford Wife programmed by the KKK.
The film is smart enough not to become too preachy and presents a balanced side to the argument, so we get supportive white characters like Skeeter Phelan, played by Emma Stone (my infatuation with Miss Stone continues to grow, almost to the point where I might make a YouTube video confessing my love for her) and white trash Celia Foote (the omnipotent Jessica Chest-ain, who has some excellent underwire work in this movie), and during the maids' testemonials they tell nice stories as well as bad.
Like TTSS, The Help features one of the best ensemble casts this year, full of excellent performances from the likes of Stone, Howard, Chastain, Allison Janney and Octavia Spencer but if you want to place a bet come Oscar season, I would say the smart money will be on Viola Davis to feature highly on many people's voting slips.  Her Oscar clip will undoubtably be the scene where she recounts the day her son died.  Very moving and is a pivotal moment in the story.
The tagline for the film is "Change begins with a whisper", but I'm shouting it loud so all can hear... get yourself some Help and get down to the cinema to see one of the best films of the year!