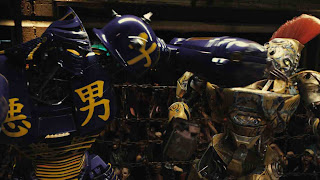 A lot of critics have described it as "Rocky meets Short Circuit", but I would say that Real Steel is closer to  "The Champ meets Robot Wars", as inbetween the scenes of giant robots laying the smackdown on each other, director Shawn Levy to graft in a heartwarming family drama about an absentee father gaining redemption in the eyes of his son.
Huh, I was just about to praise Levy for showing some ambition for doing something more than the family blockbuster fare like Night At The Museum, but thinking about it, both films do seem to have a similar plot thread.
If Real Steel was one of the robots featured in the film, it would be Noisy Boy.  It looks great on the outside but it is a bit long in the tooth and if you pick apart the insides, it is not as good as it claims to be.
The fight scenes are well designed, shot and choreographed, particularly the final showdown between the the undefeated Zeus and our underdog Atom.  And although their is a lesser degree of tension due to the fact that they are CGI robots doing the fighting, a lot of people will probably grow to care for Atom and want him to survive another round or deliver that knockout punch.
At 127 minutes running time, Real Steel feels like it goes the distance and 12 rounds, but not in a good way.  The film takes too long to really get going.  Do we really need to see Charlie (Jackman) to lose with two different robots in order to see that he is reckless, impulsive, a loser and a bit of a shit?  He sells custody of his son Max to get cash for a new bot for crying out loud.
I have mixed opinions on the casting of Jackman in this role.  Yes, he plays it well and has the old school movie charisma to pull it off.  He does act like a dick at the beginning but softens at the end as required... but he's Hugh Jackman, seemingly one of the nicest guys in Hollywood and therefore will always have the audience on his side.  It would have been interesting to see someone with a darker edge playing Charlie, to give the audience some doubt as to whether he can win his son's affections.
By the time Charlie and Max begin to bond while training up Atom, we have already reached the hour mark... and in one of the biggest crimes you can commit during a boxing movie... there is no real training montage , and if Team America taught us anything, it's that you NEED a montage!  It would have certainly shaved a few minutes off the running time.
So concerned with trying to develop both sides of the film (robot fighting/family drama), the results are each plot thread feels undercooked.  It feels like that one of the editors realised how long the film was and cut a few fights because Atom has one fight in the Robot Boxing League and Max calls out the champ, then one week later, boom, we have our main event championship fight.
In the end, the spectacle wins out over the story with several potentially interesting plot threads discarded over an extra punch or two.  I for one would have liked more Evangeline Lilly, explored whether Atom was self aware or not, and the link to the Japanese robot designer (was Atom his design?).  All these things are hinted at yet not given the chance to be fully fleshed out, ironic use of words there because if the film went to the judges' scorecards, the robots take a point victory over the humans in this one!

P.S. Who would like to see a deleted scene from X-Men where Rogue finds Wolverine in a bar fighting one of the Real Steel robots?  With his adamantium claws and skeleton he could do quite well I think.  Just one of those random thoughts I had during the screening!
Posted by Dallas King at 04:27