Normally I try to avoid going to the cinema when it is full of a) annoying teenagers and b) screaming kids, (hence why I like going to The Belmont!) but it was always going to be a near impossibility when going to watch a Disney film on a Saturday afternoon at the local multiplex! 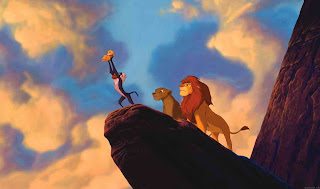 Luckily when the film you are watching is as good as The Lion King, you can (nearly) put young children singing or kicking the back of your seat to the back of your mind for 90 minutes and enjoy an animated classic on the big screen.
Bamlet TM (Bambi meets Hamlet) was one of the last great classic animated films before the dawn of the Pixar age and Disney resorted to churning out straight to video sequels.
It has everything that makes Disney films such perfect family entertainment.  Compelling story, colourful and memorable characters, a few jokes for the adults and some classic songs.  Lion King would arguably have the best soundtrack of any Disney film and while the kids were singing along all the time, I could see a few adults (myself included) trying to stop themselves joining in to Circle Of Life or Hakuna Matata.  Personally though, my favourite song in the film is Be Prepared.  I love a good villain and Jeremy Irons does a snarlingly good job as Scar.
However since everyone is pretty much aware of how great the film is, the purpose of yesterdays visit was to evaluate the 3D conversion.  And the verdict?  If the opening Circle Of Life sequence is anything to go by, I wouldn't bang the final nail into the 3D coffin just yet.  It showed how 3D can be used effectively to create depth and gravitas without having to resort to cheap tricks and didn't cause the usual headaches that 3D can sometimes bring when done poorly.
Back to the age-old argument though.  Did having 3D improve the film?  No... but it certainly didn't spoil it either and that is a vast improvement on some of the conversions I have seen in the last couple of years.
I am interested in reading Charles Gant's weekly UK box office round-up on Tuesday to see how well the re-release does this weekend - it topped the US box office a couple of weeks ago.
It could lead to studios claiming that 3D isn't dead and rushing to convert their entire back catalogue into 3D.  Disney are already in the process of doing this in fact.
But I feel that it's success lies in a much simpler answer.  People just want to watch good films.  With Hollywood seemingly content on churning out an endless series of sequels, remakes, reboots, comic book movies, etc, is it any wonder that people are embracing the chance to see a really good film on the big screen, even if that film was made 15-20 years ago?
Last year Universal re-released new digital prints of Psycho and Back To The Future.  This year we get Jurassic Park, The Lion King, Ghostbusters and Amelie back on the big screen, and in 2012 Titanic is re-released in 3D.
Similar to the "golden age" thinking that the main character in Midnight In Paris suffers from (see my review), perhaps modern audiences are so disheartened with the current state of Hollywood that they are nostalgic for the past when cinema was great.
It is something to think about... but that doesn't mean that studios should look to re-release EVERYTHING they have ever made, that might be a spot of overkill!