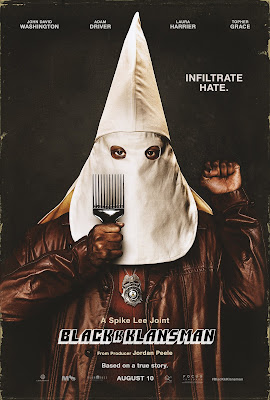 2018 is being widely viewed as a game-changing year in cinema. The #MeToo movement is starting to make changes behind the scenes in the industry; LGBTQ+ are beginning to experience more representation on the big screen (Call Me By Your Name, The Miseducation of Cameron Post, Love Simon and Hearts Beat Loud); #52FilmsByWomen.
However when 2018 comes to a close, two of the most important films to be released this year will both feature "Black" in them.
Black Panther is the highest grossing film in the US, and second worldwide to Avengers Infinity War. It caused Hollywood to sit up and take notice that African-American audiences will come out in force to see strong, heroic black characters on the big screen. It represented a huge step forward.
Spike Lee's BlacKKKlansman also features a strong, heroic black character but looks back at the past and to the future to show that not much has really changed and there is still a lot of work to do.
Based on one of those incredible true stories that sounds too crazy to be true, John David Washington (son of Denzel) stars as Ron Stallworth, an African-American police officer who managed to become a member of the Ku Klux Klan.
A new recruit to the Colorado Springs police force in the early Seventies, the rookie takes a huge punt and calls up the local chapter of the KKK and establishes a rapport with them and gets invited to join.
Obviously he cannot attend himself so it becomes a joint operation with a white officer playing Stallworth while at the meetings. This responsibility falls to Philip "Flip" Zimmerman (the always excellent Adam Driver).
The investigation that follows is simultaneously hilarious and terrifying.
The humour naturally comes from the juxtaposition of this intelligent, streetwise man taking the KKK for a ride as he worms his way into the Klan over the phone. Even getting to the man at the top of the chain David Duke (Topher Grace).
Given what transpired in the investigation, it is safe to say that the KKK do not come out of the film looking like the sharpest tools in the box as the two Ron Stallworths run rings around them. In fact, there is a certain trio that make the Nihlists from The Big Lebowski look like criminal masterminds.
However Lee never looks to dampen or diminish the threat, power and hate that made them so dangerous.
This is evident in several scenes; A crosscutting between a Black Student meeting where a lawyer talks about a horrific case and the initiation ceremony for new KKK members that ends with a party and watching Birth Of A Nation; the naive Stallworth stating that America would never elect a man like Duke to political office and the ending of the film which jumps forward to real life footage of the Charlottesville protests from last year that saw the death of a protester by white supremacists driving through people.
It was a stark reminder that the fight is not over and the war rages on. For despite it being a period piece, it feels fresh and startlingly relevant as many of the phrases and language used e.g. "America First" generated awkward laughter in the auditorium due to its prevalence in Trump's campaign.
BlacKKKlansman is easily Spike Lee's best and most important film since The 25th Hour and it is a welcome return to form for one of cinema's most important voices. So Do The Right Thing and watch it on the big screen ASAP.