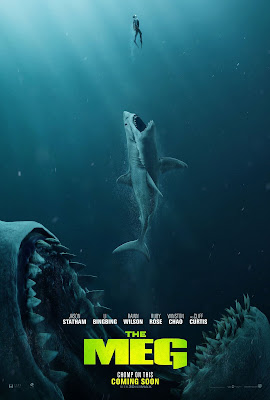 Imagine the scene. Richard Dreyfus, LL Cool J, Dr. Evil and Jason Statham sat around the table aboard the Orca.
Dreyfus tells them of a 25ft Great White he encountered off the coast of Cape Cod.
LL Cool J replies “I got that beat. Genetically enchanced super sharks”
Dr. Evil gesticulating wildly: “Sharks with frickin’ laser beams attached to their heads”
The Stath slams his fist down on the table. “Shut it you muppets” *points to himself* “Megalodon. Single handed”.
It might sound like one of the OTT boasts from Statham’s character in Spy but it is the streamlined plot description of The Meg.
Which is why it is so frustrating that the movie is such a toothless disappointment.
The megalodon-sized portion of the blame must be aimed squarely on the decision to change the production from a R-Rated tongue-in-cheek horror a la Piranha 3D, to a P3-13/12A action film. Removing all the potential gore and violence results in huge shark-bite sized chunks missing in the narrative.
It actually feels like two films stitched together. The first half is a story of redemption for Jason Statham’s deep sea rescue diver who is tasked with rescuing the crew of a brand new oceanic marine base of the coast of Shanghai.
It is only during the second half that we meet the eponymous Megalodon. Using the disaster movie formula, the audience have already been introduced to a veritable smorgasbord of shark bait in the form of stock stereotypes on board the base including level-headed boss, arrogant billionaire financier, geeky techies, potential love interest and cute/annoying child.
We all know that they are there to provide a tasty snack or three for the Meg, which is why it is disappointing that, spoilers ahead, so many of them survive until the final reel. Particularly as their characterisation is lost at sea.
There are too many periods of inactivity where we are left treading water when just like Jonas (and Dory) you need to "just keep swimming, just keep swimming". To paraphrase Alvy Singer in Annie Hall, "A movie, I think, is like a shark. You know? It has to constantly move forward or it dies. And I think what we got on our hands is a dead shark."
It also suffers from being mis-marketed with the majority of the trailers focusing on the potential carnage of the shark stalking the open waters and attacking a busy beach of swimmers but this actually only covers a very small percentage of the film.
At least the film does what The Grey could not and that is deliver on the promise of man vs beast and have The Stath face off against a giant shark. Unfortunately it is a case of too little too late and not enough to snatch victory from the Jaws of defeat.
Statham's charisma works overtime to keep the movie afloat but it is seriously lacking bite. It certainly isn’t Jaws. Hell, it isn’t even Jaws IV: The Revenge!
The Meg doesn’t so much jump the shark as bellyflop instead.