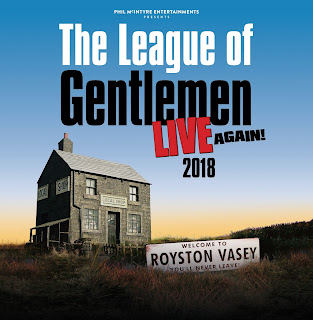 "You'll never leave!"
That is the inviting but threatening welcome that greets people when arriving in the town of Royston Vasey. Very much a local town for local people.
It would be fair to say that nearly 20 years on from when audiences first visited the town in 1999 for the BBC series, the creators have never really left the characters behind.
Individually the team have gone on to great success in their own rights; Mark Gatiss (Dr. Who, Sherlock), Jeremy Dyson (Ghost Stories) and Reece Shearsmith & Steve Pemberton (Psychoville, Inside No. 9).
Yet in this culture of golden age thinking and nostalgia, with every other band from the Nineties regrouping and going on a cash-grabbing money making tour, the question arose; would we see the return of the League?
The answer was yes but as evidenced by the incredible three-part Christmas TV special, the reformation was not fuelled by a desire to line their pockets but a genuine love of the characters and need to continue their story in this modern era.
At a sold out SEC Armadillo in Glasgow, it was clear that the majority of the audience was made up of hardcore fans as evidenced by the "You're my wife now Dave!" t-shirts and people with sellotape strapped to their faces pinning back their noses.
Many of whom would take the time to pay a visit to the Local Shop where they could pick up some of Pauline's Pens or sample the Precious Things of the shop.
The show is very much a tale of two halves.
The first half features the team in their traditional tuxedos from when they first started performing on the comedy circuit and rattled through some of their most iconic, classic sketches at a breakneck pace including a game of "Go Johnny Go Go Go Go!"; Stella, Charlie and Tony playing Trivial Pursuit;
The skill of the trio is evident as they easily morph into the recognisable characters simply by altering their voice or mannerisms.
All this leads to a fantastic first act closer from Legs Akimbo Theatre Company as director/producer/writer/actor/choreographer Oli Plimsolls laments the lack of awards recognition given to his issue-based childrens educational theatre. Taking aim at all sorts of targets from the West End including a hilarious barb aimed at Stomp but simultaneously a thinly veiled dig at the lack of recognition that the League themselves received during their original TV run.
The second half is fully set within Royston Vasey and begins with a West End/Les Mis-style musical number between Tubbs and Edward (in full costume and make up) that continues on from the cliffhanger at the end of the Christmas special.
The audience roared with approval as all their favourite characters made their return including Les McQueen; Geoff, Mike and Brian; Herr Lipp; Papa Lazarou and even one character from beyond the grave.
It would be doing a disservice to those attending the tour to spoil the surprises in store during the second half which is all brand new material. For those unlucky to get tickets, you will just have to wait for the inevitable DVD that will hit shelves just in time for Christmas!
Despite working on different projects over the last ten years, the group haven't lost a step during their sabbatical as the comic timing between Gatiss, Shearsmith and Pemberton is exceptional and the love and chemistry they share with each other is evident to the audience who gave the team a well-deserved standing ovation.
The League of Gentlemen Live Again! might be billed as a local show for local people but there truly is something for everyone on this celebratory tour that cements the League's position as the UK's greatest comedy troupe.