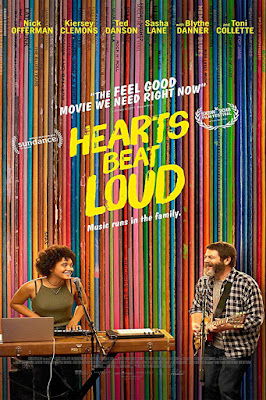 You know that feeling when you hear a song on the radio, or Spotify. It starts off similar to hits you have heard many times over, before the chorus kicks in and suddenly becomes something truly special and before you know it, you are tapping your foot and it has wormed its way into your brain for all good.
Welcome to Hearts Beat Loud.
With a story about the owner of a failing record store who discovers a new lease of life through making music with his daughter, fans of cinema can see exactly where this film is going to go. One that will probably end with the band performing a show in order to save the store, where someone puts the show on Facebook live causing them to go viral, become a huge success and ensure the future of the store.
However, Hearts Beat Loud is not that film and it is all the better for it.
Nick Offerman plays Frank Fisher, owner of Red Hook Records in Brooklyn and father to Sam (Kiersey Clemons). The store is closing due to rent increases (which clearly don't affect his large Brooklyn loft) and he needs to reevaluate his future before Sam goes off to medical school in Los Angeles.
In the hands of another filmmaker, this would be Sam's story. A coming-of-age story in that final Summer before college where she finds love and music.
Instead, it is a two-hander, with both father and daughter facing some tough choices about their future. In fact, here it is the adult father figure who needs to grow up as opposed to his daughter.
They might be on different paths but the one thing they have in common is music.
One night after Frank pesters Sam into sacking off study for a "jam session", the two write a song eponymously called Hearts Beat Loud. A joyful, modern pop song that the audience witness in its full creation as layer upon layer is added in a sequence that is superbly edited.
Offerman, who is most famous for playing the grumpy Ron Swanson in Parks & Recreation, deftly balances the sad sack of a man who is failing at life but truly comes alive through music with an infectious, giddy enthusiasm. Plus it looks as though he plays all his own instruments!
He is perfectly matched by Kiersey Clemons as Sam who has a stunning voice and after a couple of small parts in the Flatliners remake and Bad Neighbours 2 should be destined for stardom after this.
There is great support from Toni Colette (continuing a banner 2018), Ted Danson and Sasha Lane (as Sam's lesbian girlfriend in a sub-plot that is admirably played straight and without any sense of sensationalism or shock. It is simply a relationship).
Just like a sports team is only as good as its players, a film about music is only as good as its songs. Luckily, Hearts Beat Loud is not a one-hit wonder but has several chart worthy songs penned by Keegan DeWitt and performed by the cast.
We Are Not A Band also sing a song called Everything Must Go but it would be more apt to say everyone must go and see this film. One that will fill your heart with joy and have audiences singing its praises out loud.