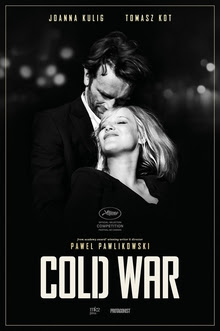 It might be a weird thing to say but with Cold War, Pawel Pawlikowski and his cinematographer Lukasz Zal have produced a black and white film that is bursting with colour.
The story of a love affair witnessed episodically over the years between a Polish songwriter and pianist and a young singer who become intrinsically linked through a love of music and then each other. An attraction that crosses and bridges barriers of age, politics, distance and borders.
Similarities could be drawn to the central pairing of Jean-Paul Belmondo and Jean Seberg in Jean-Luc Godard's A Bout De Souffle. On paper the combination shouldn't really work but the chemistry between Tomasz Kot and Joanna Kulig is undeniable and the sparks that fly between the two of them are hot enough to burn through the cinema screen.
As Eldon Tyrell tells Roy Batty in Blade Runner, "the light that burns twice as bright burns half as long and you have burned so very, very brightly".
With a passion this intense, it is clear that the relationship is ultimately doomed but something keeps drawing them back together. Like a moth to a flame.
No stranger to doomed romances (My Summer of Love, The Woman in the Fifth), with Cold War Pawlikowski has created a film that feels like a blend of La La Land meets Casablanca that has been directed by Ingmar Bergman dabbling in a French New Wave style.
That sounds like a rather jazzy way of describing this mix of notes and style but it all blends together perfectly to produce on of the best films of 2018. One that, unlike the central couple Wiktor and Zula, will find an audience and will never let them go.