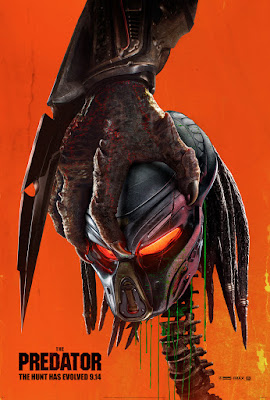 When the Predator was first introduced to audiences in 1987, the alien was showcased as one of the most efficient killers in the galaxy. Hunting down (this film correctly identifies their behaviour as hunters more than predators but the name is cooler), one by one an elite squad of soldiers in the jungle. Only stopped finally by Earth's greatest match for him, Arnie.
The first film was an incredibly lean, mean, action machine, peppered with some of the most quotable dialogue ever uttered in the movies.
30 years later, those many years of inactivity (with only sporadic hunts in 1991, 2010... and the less said about the AvP movies the better) have left The Predator bloated, out of shape and an easy target.
Following on from the success of Kiss, Kiss, Bang, Bang and The Nice Guys, it was hoped that writer-director Shane Black (Hawkins in the original film i.e. the one who told all the jokes) would bring some of that magic to the franchise.
The first couple of trailers seemed very uninspired and were almost actively avoiding showing the audience this was a Shane Black film. The final trailer was much better. Focusing on the characters and the witty dialogue with glimpses of the action.
The final result however is sadly neither the R-Rated action gore fest some fans wanted or the black comedy full of memorable, witty one-liners.
Instead, sadly, it is a complete mess. Tonally lurching wildly from one scene to the next with no apparent regard for what has happened previously plot wise.
The cast gamely do their best with the material they are given but some fare better than others.
Boyd Holbrook and Sterling K. Brown are the obvious standouts, delivering the majority of the film's best lines, and Trevante Rhodes (Moonlight) gets some nice, quieter moments.
Olivia Munn is an effective female action star but her character is hampered by having no real introduction to speak of and it cannot decide if she is a scientist who happens to know how to use an assault rifle or an ex-military person who happens to be a scientist.
The low points are Jacob Tremblay and Thomas Jane's characters who are autistic and have Tourette's and act in exactly the way you would expect them to be portrayed if this was an 80s movie... only it isn't the 80s anymore.
There were reports of extensive reshoots to fix the third act but the ripple effect throughout the film has caused a tidal wave of problems.


Jesse Ventura famously said that he "ain't got time to bleed" in the original film and I would urge everyone that when it comes to the massive disappointment that is The Predator, they ain't got time to waste on this episode of the franchise that feels as if it had its spine removed before release.
This is one ugly motherfucker!