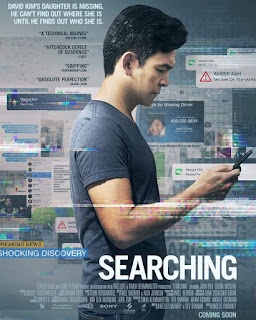 It is every parent's worst nightmare. To have your child go missing. For some parents, their second worst nightmare would be knowing that they only way to help find them would be to attempt to use their computer and social media. What other secrets would they discover? If they can get past the password and access the account in the first place that is.
That is the nightmare that David Kim (John Cho) must face when his daughter Margot doesn't come home one night after study group.
So far, so standard Hollywood thriller. However writer/director Aneesh Chaganty makes the decision to tell the story entirely through a computer screen.
The horror film Unfriended did something similar by having all the action take place via Skype but Chaganty uses a blank computer screen to advance the plot. Multiple windows and apps pop up left, right and centre, sometimes to dizzying effect but in keeping with the ultra-fast paced nature of the world that we interact with every day.
The family dynamic, and storytelling method, is subtly but effectively set up through a montage sequence of David setting up young daughter Margot with a computer account as they update it with pictures and videos from school. As the years advance, it switches between the family's user profiles as the mother Pam deals with a cancer diagnosis through calendar updates, motivational posts and capturing of memories before her return from the hospital is sadly moved to the trash bin.
Early conversations from a distracted by concerned father with his distant daughter hint that all is not well between them but David is dedicated in his search for her, leaving no stone or social media app unturned. Facebook, Twitter, Facetime, Tumblr, Instagram, YouCast, etc are all used to build up a picture of Margot for the audience and also her father who finally gets to know his daughter for the first time in years.
John Cho is excellent as the frantic father, effectively delivering his heightened level of emotion through a tiny iPhone Facetime screen.
What he does is provide an effective step-by-step guide to parents on how to hack into their childrens' computers and social media accounts if they wanted to spy on them.
The information comes thick and fast and tech-savvy millennials will likely be two-three steps ahead as they quickly use their knowledge of the online world to piece together the clues.
Others not so au fait with the technology may find themselves baffled or even utterly lost as to what is going on.
Although the film has found a new way of delivering a tried-and-tested story, unfortunately the film comes hot off the heels of a TV mini series on Netflix that features a very similar plot with an identical ending that results in a case of diminishing returns for Chaganty's feature.
An interesting look at how reliant we are on the technology that has permeated every aspect of our lives but if you are Searching for the best films of 2018 at the end of the year, this is unlikely to feature in the google search results.