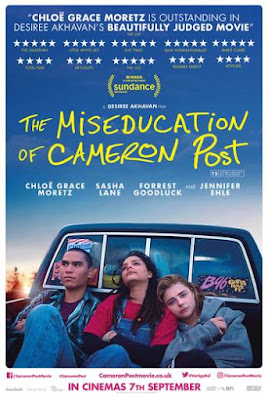 As one can tell by the above poster's blue background and yellow font, The Miseducation Of Cameron Post is being marketed as this year's Call Me By Your Name. 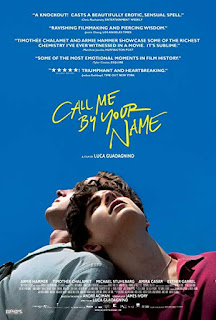 However this Sundance hit by Desiree Akhavan, based on Emily Danforth’s novel, is closer to being this generation’s One Flew Over The Cuckoo’s Nest.

There are many parallels that can be made between the two films:
The titular miseducation of Cameron Post has a double meaning. When she is discovered acting on a SSA “same sex attraction” on prom night, Cameron (Moretz) is sent to a bible camp to “pray the gay away” and correct her perceived miseducation. On the flip side, all those who believe that there is nothing wrong with her feelings and actions can perceive this form of treatment as a miseducation in itself.
While there is not the physical and medical abuse used in Cuckoo’s Nest against the patients to “help” make them better, there is certainly abuse of an emotional level. The emotional abuse and trauma of making these young people believe that there is something wrong with them and are sinners and unworthy in the eyes of God.
In certain ways, the story could be seen as a horror movie. Sent to a remote community in the woods, the young people are “tortured” one by one by a sadistic and vicious antagonist, who obviously believes they are right, until a breaking point occurs, leading to a rebellion.
Ever since Chloe Grace Moretz debuted in Kick Ass in 2010, her star quality was clear for everyone to see as she stole the entire movie from her older and more established costars. Even from Nic Cage’s OTT but best role in years.
I remarked then that she had reminded me of a young Jodie Foster or Natalie Portman and had the potential to become as good as them.
Outside of Clouds of Sils Maria and Let Me In (the decent but unnecessary remake of Let The Right One In), Moretz has struggled with Hollywood movies that were not as good as she was (Carrie, The 5th Wave).
After taking a sabbatical for a couple of years, this is the first film that shows Moretz truly living up to that potential.
She is excellent and completely believable as Cameron. Showcasing a troubled teen who is questioning everything about herself and unsure of what to believe. Similar to Randall McMurphy, her arrival at the camp is a turning point for many of the other teens there and she represents a beacon of hope as she refuses to conform and give in to the demands of Dr. Lydia Marsh (Jennifer Ehle, who appeared on screen as the spitting image of a young Meryl Streep).
Post's presence at the camp, causes many to question themselves and the regime. Exemplified by a joyous sequence where there is a communal sing-a-long to What’s Up by 4 Non Blondes. A cathartic release akin to the Tiny Dancer moment in Almost Famous.
Even though the film's characters are terrified and confused (just check out the pitch perfect nod to The Graduate), one person who is not is writer-director Akhavan who shows a confidence and assurance in every decision in both the script and filmmaking.
It feels authentic in its Nineties-setting but is still shockingly relevant. She also knows that it is the normalcy of the situation which is the scariest aspect of the story, one that will have an emotional affect on the audience thanks to the impressive performances and strong characterisation.
The only praying The Miseducation of Cameron Post needs to do is to hope that the film finds the audience that it deserves. Because once they do they will have an undeniable attraction to it.