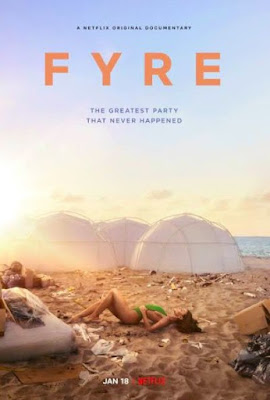 If one wanted to use a film quote to aptly sum up the failure of #FyreFestival that went from the "hottest party" to an example of the perils of PR, marketing and poor event management that will be taught in schools for years to come, one need look no further than Jerry Maguire:
"I'm finished, I'm fucked. Twenty-four hours ago, man, I was hot! Now... I'm a cautionary tale. You see this jacket I'm wearing, you like it? Because I don't really need it because I'm cloaked in failure!"
In 2017, the world watched on social media as a group of privileged American "influencers" had a meltdown on Twitter and Instagram as they arrived on an island in the Bahamas for an exclusive music festival only for it to go horribly wrong and quickly turn into a "first world problems" version of Lord Of The Flies as panicked Instagrammers ran around trying to find tents to sleep in and wept about the awful state of a cheese sandwich.
This Netflix originals documentary (one of two on the festival out this month) has been developed by one of the teams who were involved in the marketing of #Fyre so they have behind the scenes footage of owners Billy McFarland and Ja Rule as they plan to put on an event to help promote their music booking app #Fyre but just seem more concerned with having a massive piss up with supermodels on a deserted island than actually planning the logistics of successfully delivering a high-end, luxury event for people paying thousands of dollars to attend.
As the film counts down to the day of the festival, the sheer level of ignorance, ineptitude and stupidity on show is staggering as the team, under the leadership of McFarland, lurch from one disaster to another. McFarland, despite being in the face of an insurmountable number of problems, just keeps moving forward. It was as if he was the captain of the Titanic who could see the "Iceberg, right ahead!" and just continued on his current course, thinking everything will be fine, even to the point he goes down with the ship.
He is the physical embodiment of the dog in the house on fire meme "This is fine" and the festival-goers are Donald Glover walking into the room on fire meme!
The film has been described as a Jaws for millennials and the description is apt because the #Fyre team (including the affable, nice Andy King who has the single most shocking anecdote you will hear this year regarding Evian water) come across like the Murray Hamilton's Amity Island beach. He knows there is a shark that could kill everyone but still lets them in the water. The #Fyre team know the festival will fail, that they don't have enough accommodation and food for everyone (not even getting to the fact the accommodation is not what was advertised) and yet they still let them come to the island!

There is an old adage in Hollywood that "you couldn't make it up" and that the truth is stranger than fiction and this is one of those stories which is so incredulous and unbelievable in how it all unfolded that you will be sitting slack-jawed and shaking your head in disbelief throughout.
It is a fascinating look at the world that we currently live in and a timely reminder of the power that social media can have over our lives and that sometimes we should take a step back and switch off every now and again to avoid getting burned.