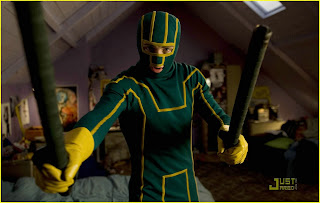 KICK-ASS is not your typical comic book movie. This is a movie about people who read comic books.
Dave Lizewski has grown up reading comics, and to paraphrase a great line from GOODFELLAS, "as far back as he could remember, he always wanted to be a superhero", and so he tries a spot of costumed vigilante justice in the form of Kick-Ass. However thisis the real world. It's not "with great power comes great responsibility" but more like "with no power comes no responsibility", and Kick-Ass soon discovers that being a superhero without superpowers is actually a bad idea when he gets mixed up with a vengeful mob boss and a couple of 'real' heroes.
Since most comic book movies start with the origin of our hero, it is useful to look at the origin of the movie.
After false starts on X-MEN 3: THE LAST STAND and THOR, Matthew Vaughn was still desperate to make a comic book movie. Screenwriting partner Jane Goldman introduced him to her friend Mark Millar, a hugely successful comic writer for Marvel. He had a project called KICK-ASS and Matthew was immediately drawn to this pop culture referencing, ultra violent and Daily Mail-baiting story, there was just one problem... no studio wanted to touch it. Mainly due to one character in particular, but we'll get to her in a minute.
So Vaughn raised $30 million by himself and decided to make it on his own.
The result is one of the greatest independent movies of all time, slicker and more inventive than most of the current output from Hollywood, and Vaughn is having the last laugh as all the studios that initially passed on the film were fighting tooth and adamantium claw with each other for the chance to distribute the film.
Billed as SPIDER-MAN meets SUPERBAD meets KILL BILL, this movie has just about everything you could want from a comic book movie; inventive action scenes ranging in style from Jackass to first person shooter to full on John Woo bullet ballets; laugh out loud humour; lots of cool comic book references for the geeks out there, yet remains accessible for the unitiated or un-nerdy; Vaughn, like Tarantino, displays a good ear for music in his use of songs in the film from a crazy use of the Banana Splits theme to a superb use of the score from Danny Boyle's SUNSHINE in the most emotionally affecting scene I have ever seen in a comic book movie.
The real strength of the film lies in its characters and their relationships, who are given real depth by writers Jane Goldman and Mark Millar.
Aaron Johnson is very good as Dave/Kick-Ass, making him accesible and relatable (let's face it, most blokes have at one time or another dreamed about being a superhero). But as with most superhero films, it is often the supporting characters and villains who are more interesting and entertaining.
Mark Strong cements his role as Britain's top rent-a-baddie, with another excellent turn as Frank D'Amico, and Mclovin... sorry Chris Mintz-Plasse is good a Frank's son who is trn beween hving a friend for the first time and proving himself to daddy.
Speaking of daddies, Nic Cage delivers his finest performance in years as Big Daddy. Gone are the memories of THE WICKER MAN remake as he strikes the right balance between tender an crazy in a convincing father-daughter relationship with Mindy and the balls-out action hero. I couldn't stop myself laughing when I heard him do his Adam West impression whenever dressed as Big Daddy, 'tis a stroke of genius.
Which leads us to the film's secret weapon. The reason the Daily Mail is getting its panties in a twist... Hit Girl!
When people leave the cinema at the end of the film, it will be Hit Girl that they will be talking about. Imagine if Leon had survved to train up Mathilda to be a fully-fledged assassin and you are not even close. In her first appearance she delivers the C-bomb before laying waste to a room full of henchmen. After that she dials the action up to 11 and steal every single scene she is in, yet amazingly never allows you to forget that she is just an 11 yar old kid.
Between Hit Girl and her role as Ei in the upcoming US remake of LET THE RIGHT ONE IN, Chloe Grace Moretz will be the breakout star of 2010, I guarantee.
KICK-ASS can be described as a Ronseal film, in that it does exactly what it says on the tin. Not only one of the most enjoyable cinematic experiences of the year, but one of the best comic book movies of all time. While it might not be as good as THE DARK KNIGHT, it is certainly a lot more fun!
Edgar Wright, the bar has been raised fo SCOTT PILGRIM VS. THE WORLD. I await the results with baited breath!
Posted by Dallas King at 03:29