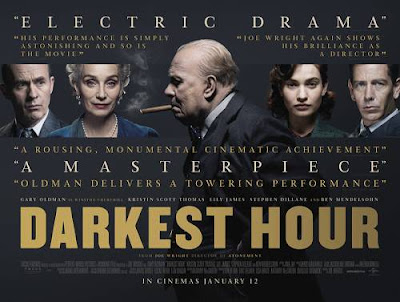 That Dunkirk spirit is well and truly alive and in full force at the moment in the UK. Following 2017's Their Finest and Christopher Nolan's cinematic masterpiece Dunkirk last July, it seems that filmmakers are not heeding Basil Fawlty's advice and can stop mentioning the war!
For Darkest Hour which shows what was happening across the channel as the men waited, and waited, for their salvation and evacuation.
Not only is Dunkirk the flavour of the month but this is the third screen characterisation of Winston Churchill in the last 12 months, following Brian Cox's Churchill and John Lithgow's portrayal in The Crown.
Churchill is so popular at the moment, don't be surprised if you see a feature length adaptation of the Churchill nodding dog put into production by the end of the week!
Director Joe Wright also returns to the issue of Dunkirk, 10 years on from filming that incredible single take tracking shot of James McAvoy and the troops on the beach in Atonement. However there is very little of that inventiveness and bravura filmmaking style on show here. It sadly falls into the trap that many biopics of British subjects and heroes can fall into, in that it feels more like a Sunday night BBC drama than a film destined to be enjoyed on the big screen. Yes, I'm talking about you The King's Speech (and on that topic, I much preferred Ben Mendelsohn's take on George VI than Firth's).
The only time the visual flair exhibited in the dance sequence in Pride & Prejudice and every frame of Atonement and Anna Karenina came into view was the shots of Churchill in lifts surrounding by darkness or peering through windows, slowly increasing his sense of isolation from the cabinet and imprisonment within his belief to do what he believes is right for the British people.
The film does capture how alone Churchill was in his stance against the impending pressures of Nazi Germany, feeling like he was one man against the world.
The film is perhaps too effective at this however as ultimately Darkest Hour is a two hour drama built on the foundation of one performance of bluster and bravado by Gary Oldman.
From the first time we see Churchill, Oldman disappears beneath the prosthetics and costume to completely embody the British Bulldog, and stomps, shouts and chews as much scenery as he does cigars that no one else can barely register an impact on screen. Even the great Kristin Scott Thomas gets left in the shadows as his wife Clemmie.
Rather than a big screen adaptation, Oldman's Churchill might have been better suited to a one man show on the West End where he performed some of his greatest speeches to a captive audience.
While there is no denying Winston's impact and legacy on British history, the Darkest Hour is unlikely to be the brightest moment in the history books of Oldman and British cinema. Even if it does bring him a shiny golden Oscar.