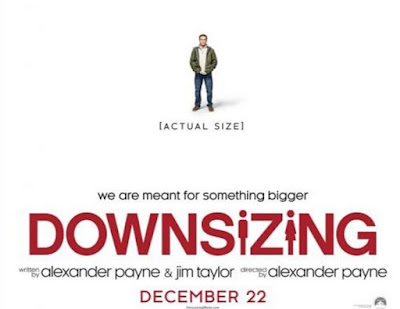 There is a great movie somewhere in Downsizing. You just have to go looking for it... with a magnifying glass because it is buried deep in the heart of it and it does get overwhelmed and lost by the magnitude of the film's sci-fi proposition.
Downsizing does start very strongly indeed, with very big ideas as scientists discovering the technological process to reduce organic matter is size, with an eye to solving the problem of the world's overpopulation and consumption of natural resources.
Miniaturised colonies start springing up all over the world with humans "downsizing" to live a higher quality of life, as their money goes a lot further down there.
Matt Damon & Kristen Wiig play an a-typical American mid-western couple, struggling to get on the housing ladder in the "real" world. After visiting a high school reunion, they meet a couple of friends who made the move and discover they can live like millionaires and retire in LeisureLand: a Disneyland-style version of the perfect life. It IS a Small World after all!
The film is at its best during the first half of the movie as it deals with Damon and Wiig making the decision to change their lives (and bodies) forever.
There is a great deal of mileage to be run out of the social and economic satire provided by the scenario. The salespeople paint the image of a perfect lifestyle that helps the environment and doing their part to save the world but on the flip side, blue collar Americans chastise them for not providing enough to the US economy and should they retain the same rights if they are only 5 inches tall?
So it is disappointing that following a plot development at the mid-way point (sadly given away in the trailers) that could have provided the drive for the second half of the movie is forgotten in favour for staying in the downsized world.
Think about it. All of the great movies that have featured miniaturised people; Honey I Shrunk The Kids, Innerspace, Ant-Man, etc. The most memorable and exciting parts of the films have been seeing the tiny people interacting with the oversized environment around them.
It is admirable that Payne wanted to do something different, but it ultimately becomes another story about a man trying to find his place in the world and discovering that that brave new world is just like the real one. There is love, pain and despite the brochures painting the idyllic existence, the rich life the high life while the help live in poverty on the other side of a very tall wall (did Trump build Leisureland?).
Damon is nicely understated as everyman Paul Safranek to balance out Hong Chau's bold, brash Vietnamese refugee and the larger-than-life performance of Christoph Waltz as his new neighbour who introduces them to the hedonistic lifestyle afforded to them.
The final third of the film takes a drastic shift in plot and tone that while is somewhat in keeping with the big ideas set out at the beginning of the concept, it does little to advance the characters.
Ultimately the film is very much like the Downsizing procedure. Big on ideas and potential but the end product comes up short.