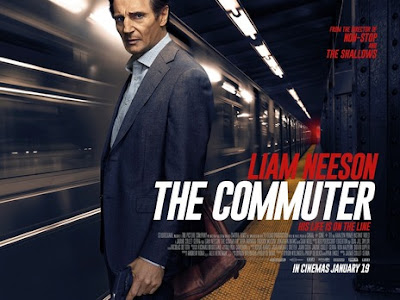 Ah, the daily commute. It can become quite dull and routine can't it? You don't look forward to it but it is necessary for work. Doing the same thing day after day, one starts to hope one day something exciting or different might happen to alleviate the boredom.
But enough about Liam Neeson's film career since starring in Taken.
In The Commuter, Liam Neeson is man who is forced to do everything a mysterious, shadowy group of people tell him to do or his family will be hurt.
But enough about his film career since starring in Taken.
All joking aside, audiences go to these films expecting a certain type of film with a lead actor displaying a particular set of skills e.g. Neeson, The Stath, The Rock, etc.
This has resulted in some reviewers saying that they adjust their expectations and judgement accordingly.
Similar to a journey on Southern Rail, our expectations are deliberately low and with good reason. That doesn't mean however that we should let them off with bad service. This goes for genre films as well.
It is okay to give the audience what they want but there should be a benchmark for quality and they should strive to offer them something they haven't experienced before, or deliver it to them in a different, more exciting way.
So it is a shame that Neeson's character, after being threatened by a mysterious figure, is forced to uncover the identity of an unknown passenger in exactly the same plot as Non-Stop, although instead of a plane it is set on a train.
Also with Vera Farmiga as the one giving the orders, between this and Source Code, she is building a reputation as someone who loves to tell men what to do aboard commuter trains.
Like Non-Stop, there is mileage out of the central Guess Who game of spot the culprit. Is it Mike from Breaking Bad? Is it Lady Macbeth? Is it a stock broker played by Clem Fandango? Yes we can hear you Clem Fandango!
Sadly the film (literally) derails once the bad guy is revealed and that, along with a farcical scene replicating one of the most famous moments from a gladiator film, are moments so clearly signposted and as predictable as the stops along your route home.
Guess now we can look forward to Taken in a taxi in a couple of years so Neeson can complete his unique Planes, Trains and Automobiles trilogy.